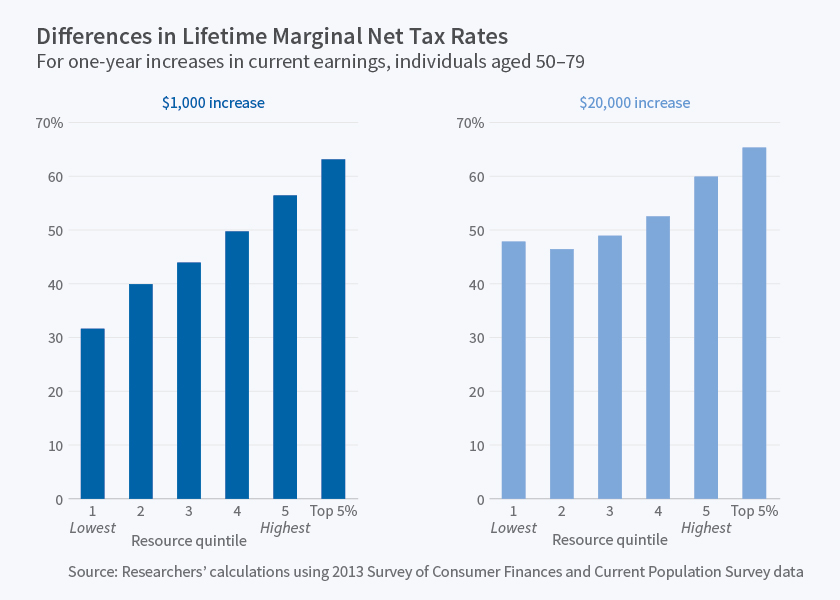 Older workers today confront many difficulties in financing their retirements, including longer life expectancies, low interest rates, a changing pension landscape, and the possibility of future changes to Social Security, Medicare, and Medicaid benefits. In this challenging environment, working longer has often been presented as the key means to achieving greater retirement security.

Yet whether this is the case depends critically on the total net financial return to additional work. Calculating this net return requires incorporating not only standard federal and state taxes but also work disincentives arising from the structure of government transfer programs. In Is Uncle Sam Inducing the Elderly to Retire? (NBER Working Paper No. 22770), researchers Alan Auerbach, Laurence Kotlikoff, Darryl Koehler, and Manni Yu measure the work disincentives operating through the tax and transfer system for older workers in the U.S.

The researchers calculate "remaining lifetime marginal net tax rates" of those ages 50 to 79. These tax rates include explicit taxes, such as federal and state income taxes and FICA payroll taxes, as well as implicit taxes, such as the loss of government benefits or increase in income-based premiums for government programs that may result from higher earnings. Losing eligibility for food stamp benefits or paying higher Medicare Part B premiums are examples of the latter. These tax rates are lifetime measures in that they incorporate changes in taxes and benefits that will occur in future years as a result of additional work today. The researchers use data from the 2013 Federal Reserve Survey of Consumer Finances, and run households through The Fiscal Analyzer, a software program they developed.

The researchers find that many older workers face high work disincentives resulting from the design of the U.S. fiscal system. An individual aged 50 to 79 in the lowest quintile of household resources who raises his or her earnings by $1,000 this year can expect to lose over 30 cents for each dollar earned (or over $300 total) in higher taxes paid and lower government benefits received this year and in the future. The tax rate is higher for those with more resources, reaching 56 percent for those in the top quintile and 63 percent for the top 5 percent of households. Even among the poorest households, the tax rate approaches 50 percent when one considers a $20,000 increase in current earnings rather than a $1,000 increase. The high rate is due to the threshold nature of eligibility for many programs, as a substantial increase in earnings may render individuals ineligible for benefit programs or tax credits that are targeted at lower-income households. These lifetime marginal net tax rates are far higher than the current-year tax rates normally considered, which the researchers view as highly misleading.

The researchers also report incentives for Social Security recipients ages 62 to 65. At these ages, workers face a Social Security earnings test that reduces benefits above a certain earnings threshold; lost benefits are subsequently returned to workers in the form of a benefit increase, but this feature of the program is not well known. The researchers calculate tax rates both including and ignoring this misunderstood feature. Surprisingly, two sets of tax rates are relatively similar, as the higher Social Security benefits workers receive through this little-known provision can end up bringing them closer to the eligibility thresholds for Medicaid and other transfer payments. As the researchers say, "In other words, lessening the importance of one marginal net tax can enhance the strength of others."

Finally, the researchers estimate the impact of longer work lives on retirement income. They find that working five additional years for an individual age 60 to 64 in the middle household resource quintile would raise retirement living standards by ten percent. This is substantially smaller than the increases estimated in the previous literature, which the researchers attribute to their inclusion of all transfer payments and other methodological differences between their work and previous studies.

The researchers conclude, "older workers typically face high, very high, or remarkably high marginal net taxation on their extra earnings." They also note that it is unclear whether the elderly correctly perceive these disincentives, or indeed whether "policymakers, themselves, are cognizant of the level and spread of the work disincentives they are imposing on the elderly."

The authors acknowledge funding from the Sloan Foundation, the Robert D. Burch Center for Tax Policy and Public Finance at the University of California, Berkeley, Economic Security Planning, Inc., and Boston University for research support. At least one co-author has disclosed a financial relationship of potential relevance for this work. Further information is available online at http://www.nber.org/papers/w22770.ack.

Is Uncle Sam Inducing the Elderly to Retire?