Capacity to Work Around the World 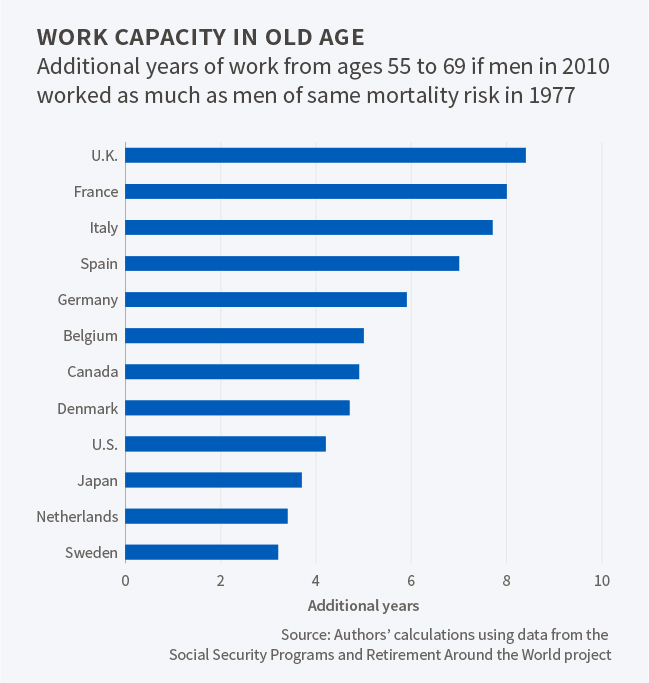 Many social security systems around the world face long-term solvency challenges. Raising the retirement age is frequently suggested as one possible reform, since rising life expectancy is a contributing factor to the systems' strained finances.

A key consideration in any debate over raising the retirement age is whether individuals are healthy enough to extend their working lives. This question is the subject of the recent working paper by researchers Courtney Coile, Kevin Milligan, and David A. Wise, The Capacity to Work at Older Ages (NBER Working Paper No. 21939). Their paper is the introduction and summary to the most recent volume in the Social Security and Retirement Around the World series, in which researchers from the U.S., Canada, Japan, and nine European countries undertake similar analyses and combine them to gain greater insights.

The researchers employ two methods to estimate the ability of older individuals to work longer. They first ask, if individuals today worked as much as people with the same health worked in the past, how much more (or less) would they work? Health in this case is defined as mortality risk. In the U.S., for example, today's 55-year-olds have the same risk of dying as 49-year-olds did in 1977, due to improving mortality. Yet the employment rate of today's 55-year-olds is 17 percentage points lower than that of their same-mortality counterparts in the past. This yields the estimate that employment could be 17 points higher at this age, equating to an additional 0.17 years of work. Applying this logic at ages 55 through 69 suggests that individuals could work an additional 4.2 years, on average.

The values for other countries are also large, ranging from 3.2 years in Sweden to 8.4 years in the UK, with an average of 5.5 years across the twelve countries. But the average value is only 1.7 years if 1995 is used as the base year. This difference is due in large part to employment rates, which reached a low point around 1995 in most countries but were higher in both 1977 and 2010. As the authors note, "over the 1995 to 2010 period, employment has risen substantially in virtually all countries, and these employment gains have largely if not completely kept up with the gains in mortality." Looking back to 1977, mortality gains have been even larger and employment increases have not kept pace.

In their second approach, the researchers base their estimate of work capacity on a comparison to younger workers. The authors estimate the relationship between health and work for individuals ages 50 to 54 and combine this with the actual health of those ages 55 to 69 to predict their ability to work. The predicted share working declines with age, since health declines with age. Yet actual employment rates fall far faster than predicted rates. The difference between predicted and actual employment rate is the estimated additional capacity to work. For example, the authors estimate that an additional 17 percent of U.S. men ages 60 to 64 could work, based on their health status.

Interestingly, predicted employment rates are fairly similar across countries, while actual employment rates vary dramatically. At ages 60 to 64, for example, the share of men working ranges from 80 percent in Japan to less than 20 percent in France. Thus the authors estimate that the additional capacity to work at ages 60 to 64 is 50 percent or more in Germany, Italy, Belgium, and France, but less than 20 percent in Japan, Sweden, and the U.S. Earlier work in the series suggests that Social Security program provisions can explain much of the differences in employment rates.

In sum, both methods suggest that many older people may have additional capacity to work beyond current employment levels. The authors caution that their work "is not intended to suggest how long people should work nor to suggest what typical retirement ages should be in various countries." As people live longer, it may be natural for gains in life expectancy to be divided in some way between years of work and retirement. Further, there may be other factors that make it difficult for people to extend their working lives, such as weak demand from employers, which were not explored in this study.

The authors conclude, "the concept of health capacity to work, however, can be important in considering whether continued incremental increases in retirement ages, such as those that have been common in many countries over the past two or three decades, might be constrained by the health of older workers going forward. The results of this phase of the International Social Security Project suggest that this is not the case."

Social Security and Retirement Programs Around the World: The Capacity to Work at Older Ages – Introduction and Summary