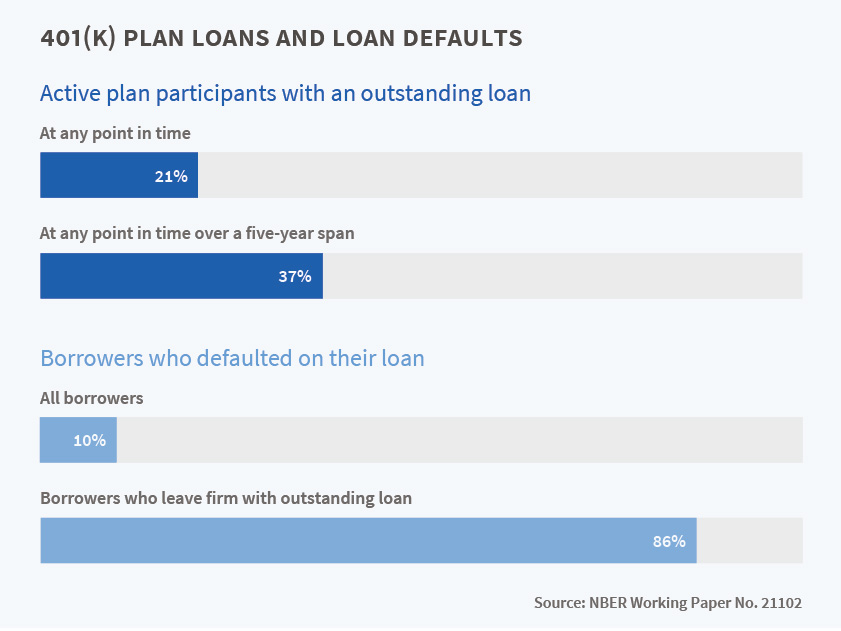 Defined contribution (DC) pension plans such as 401(k)s are intended as a vehicle for retirement savings. Yet there are ways for participants to access these tax-deferred accounts prior to retirement. Individuals who have left their employers may withdraw funds from their accounts before age 59 ½, but then they must pay taxes on the withdrawn amount plus a 10 percent penalty. In addition, many employers allow active workers still on the job to borrow from their 401(k) plans.

The potential effects of allowing loans on retirement savings are complex. On the one hand, people may save more in their workplace-based accounts if they are more liquid. On the other hand, if the loans are not repaid and the worker terminates employment, the defaulted loan may result in a permanently smaller retirement nest egg. Relatively few previous studies have explored 401(k) borrowing.

Borrowing from 401(k) plans is governed by U.S. Treasury regulations. Active workers may borrow up to half of their account balances, with the maximum loan capped at $50,000, and they also must agree to repay the loan with interest, usually through payroll deduction. In addition, employers may impose their own requirements on plan loans, including whether loans are permitted at all, the number of loans allowed, whether loans must be for some minimum amount, and the interest rate that borrowers must pay. About 90 percent of active contributors have access to loans.

The authors use a rich administrative dataset for DC plan participants covering nearly 900 plans and more than 900,000 participants over a five-year period. In their data, 1.4 percent of eligible participants take out a new loan in any given month, on average. The average amount borrowed with a new loan is about $7,800, while the average total amount borrowed (across all loans) is about $10,000. Most plans charge an interest rate equal to the Prime Rate plus one percent. About 40 percent of plans (covering just over half of the participants studied) permit workers to take out two or more loans at once.

How many participants take advantage of the opportunity to borrow from their retirement accounts? Roughly 20 percent of active participants have an outstanding loan in any given month. This amount remains roughly constant over time, indicating that the loan origination rate is approximately offset by the rate of loan repayments or defaults. Over the five years of their study, however, nearly 40 percent of participants are borrowers. Thus, "many different participants eventually borrow from their retirement accounts over a longer time horizon."

The authors also explore which workers are more likely to take out loans. They find that the probability of borrowing is higher for participants who earn lower incomes, have fewer non-retirement financial assets, and have lower account balances, suggesting that credit constraints play a role. Participants ages 35 to 44 are more likely to borrow than their younger or older peers, as are those with longer job tenure. This pattern may reflect offsetting changes in the ability and need to borrow as participants age. Loan amounts display the same hump-shape pattern with age, but those who have higher income and more retirement or other assets borrow more, conditional on taking out a loan.

In terms of how plan loan policies might affect the use of loans, the authors note that if a "buffer-stock model" governs borrowing behavior, participants will be more likely to borrow but will take smaller loans when the plan allows multiple loans. The theoretical effect of the interest rate on borrowing is less clear, since a higher interest rate makes the loan costlier to the participant but ultimately leads to higher account balances.

The authors find that if the plan sponsor allows employees to take out multiple loans, the probability that participants take out a new loan rises by 2.7 percentage points, or nearly twice the mean rate of 1.4 percent. Permitting multiple loans lowers the size of the new loan by about 20 percent. These findings are consistent with the buffer stock model. By contrast, borrowing behavior is unaffected by the interest rate. Permitting multiple loans particularly induces young and low-income participants to borrow more.

As the study spans the period before and during the recent financial crisis, the authors examine whether borrowing changed during the crisis. They find that participants were about 40 percent less likely to take out new loans during the crisis. Since loans are often tied to home improvements, it could be that the drop in the housing market led to a lower demand for loans for this purpose.

The authors also look at loan default behavior. They find that, while 9 out of 10 loans are repaid, defaults are very common among those terminating employment with loans outstanding — indeed, 86 percent of such participants default. Default behavior is relatively similar across plan and participant characteristics. This leads the authors to "conclude that other unobserved factors may be driving pension loan defaults. These could include financial illiteracy, discounting, or lack of self-control. In our context, this could mean that many employees taking loans were simply unaware of the consequences of job termination for their 401(k) loan."

Finally, the authors estimate that the aggregate outflow from defaulting 401(k) loans is on the order of $6 billion per year, an amount that is much smaller than the leakage from people cashing out their retirement accounts after leaving their employers. The authors conclude that their findings "underscore the fact that DC retirement accounts are intended mainly for old-age financial security, although they do offer pre-retirement liquidity to meet current consumption needs."

At least one author has disclosed a financial relationship of potential relevance for this research. Further information is available online at http://www.nber.org/papers/w21102.ack.

Borrowing from the Future: 401(k) Plan Loans and Loan Defaults