How Health Evolves After Retirement: The Role of Education 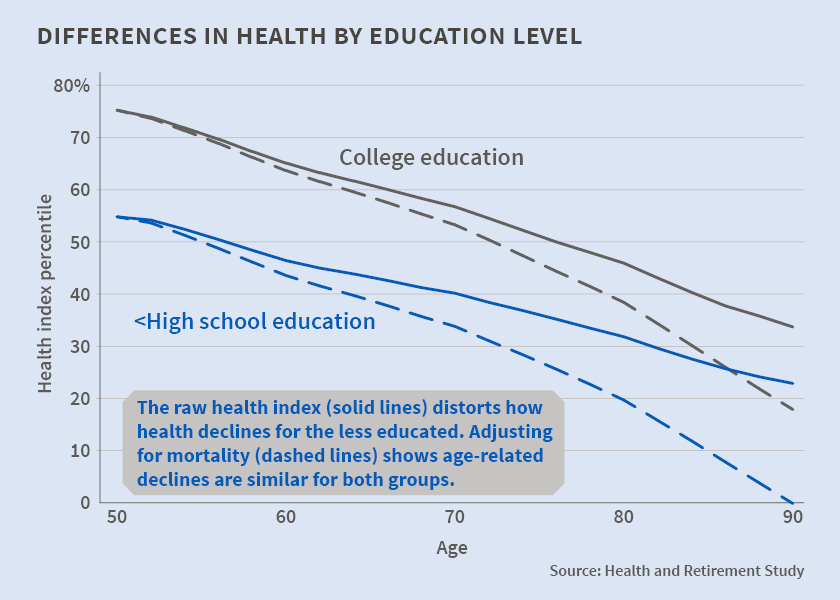 If there is nothing certain in life besides death and taxes, as Benjamin Franklin once wrote, the decline of health at older ages might be considered a close third. Yet quantifying how quickly health declines with age and exploring how this varies by education and racial group is not a simple task.

Researchers Florian Heiss, Steven Venti, and David Wise take on these questions in their recent paper "The Persistence and Heterogeneity of Health Among Older Americans" (NBER Working Paper No. 20306).

The authors begin by pointing out that a simple tabulation of average health by age will yield a misleading picture of how health evolves with age for a typical individual. The reason is that two things happen as people age. First, as expected, health declines. Second, people in better health are more likely to survive from one age to the next. The latter effect, on its own, leads to improvements in average health over time; ignoring this effect thus leads to an understatement of the age-related decline in health.

The authors illustrate this point using data from the Health and Retirement Study (HRS), a longitudinal survey of individuals age 50 and up that began in 1992 and includes rich data on health. They first construct a health index based on responses to 27 questions about functional limitations, health conditions, and medical care usage. For each survey wave, each individual is assigned a health index percentile, where the value reflects the person's position relative to the health of all persons in the HRS in all survey years.

Over the period 1994 to 2010, married individuals in the original HRS cohort (ages 53 to 63 in 1994) experience an average decline in the health index of 16 percentage points. However, this includes a roughly 7-point increase in the index due to greater survival among those who were in better health in 1994. Removing this effect reveals a "true" age-related decline in health over the 16-year period of 23 percentage points.

Ignoring the effect of survival can distort conclusions about how health declines with age across education and racial groups as well. To show this, the authors produce simulations based on a joint model of health and mortality. As seen in the figure, at age 50, the average health index value for individuals with a college education is 20 percentage points higher than for those with less than a high school education. The gap appears to narrow to less than 10 points by age 90 (as seen in the convergence of the two solid lines), suggesting that health declines relatively more slowly with age for the less educated.

However, after adjusting for the fact that healthier individuals are more likely to survive to older ages, the gap is more or less constant from age 50 on (as seen in the dashed lines). Thus, age-related declines in health are roughly similar across education groups. A similar finding holds with respect to race - the Black–White gap in health appears to narrow from 8 to 5 points between ages 50 and 90, but after adjusting for differential survival, the health of Blacks actually declines more rapidly with age than the health of Whites.

The differential levels of health by education group that can be seen in the figure also have important consequences for survival. The authors find that the less educated have substantially higher mortality and that this is primarily due their poorer health—in fact, worse health can explain about four-fifths of the relationship between education and mortality for women, and about two-thirds of the relationship for men.

How does the effect of race compare to that of education? Ignoring education, there are large differences in health across racial groups, with a 12-point gap in the health index between non-Hispanic Whites and non-White Hispanics for women at age 50 and a 7-point gap for men. However, after accounting for differences in education across racial groups, these gaps shrink dramatically.

One practical implication of the study's findings relates to the private annuity market. The authors show that the value of an annuity is more than twice as high for someone in the top decile of health with a college education as compared to the value for an individual in the lowest health decile with less than a high school education. As people of the same age and gender face the same premium, "this suggests the scope for adverse selection is enormous."

The authors gratefully acknowledge funding from the National Institute on Aging (grant P01-AG005842 and P30-AG012810) to the National Bureau of Economic Research.

The Persistence and Heterogeneity of Health among Older Americans