Facing rising life expectancies and falling birth rates, many countries have raised retirement ages in their public pension programs to ameliorate long-run fiscal deficits. In the US, the normal retirement age has gradually been rising from age 65 and will reach age 67 for those born in 1960 or later.

Testing this theory empirically has proven challenging. While there are many instances of countries changing the early or normal retirement age in their pension plan, these reforms typically include other changes that can also affect work incentives and behavior. In the US, for example, the rise in the NRA has resulted in a decrease in the lifetime value of benefits, since for a given retirement age, the monthly benefit amount is lower when the NRA is higher. This makes it difficult to determine whether any tendency to retire later after the reform reflects a response to the later NRA or to the reduction in pension wealth. 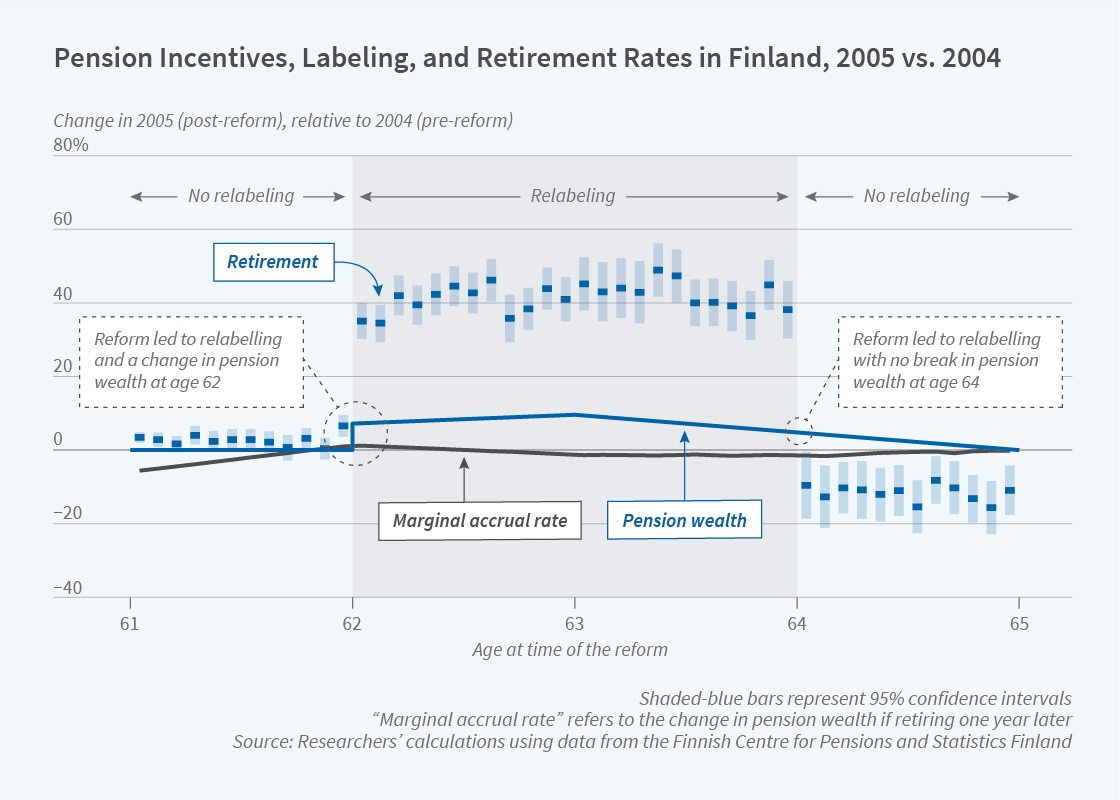 Before 2005, workers in Finland faced an ERA of 60 and a NRA of 65. In 2005, the system was reformed so that a new "flexible" retirement age was introduced at age 63. Workers who were age 62 at the time of reform could access the new flexible benefit as soon as they turned 63 (within the next 12 months) but also experienced some changes in pension wealth and in the accrual rate (the change in pension wealth resulting from working another year) due to the reform. Workers who were 63 at the time of reform also experienced changes in both retirement ages and financial incentives. By contrast, workers who were age 64 at the time of the reform were unaffected by the access to new retirement option, since they could already anticipate having access to normal retirement benefits at age 65, but had similar changes in financial incentives. Comparing these groups of workers allows the researchers to isolate the effect of relabeling age 63 as a focal retirement age.

The authors find that there was a 40 percentage point increase in retirement at age 63 among the cohorts suddenly made eligible for retirement. This extremely large and immediate response to the relabeling of age 63 as the new normal retirement age suggests that "relabeling is as powerful as enormous changes in pension wealth or dynamic pension retirement incentives" in driving retirement decisions.

The authors also explore regret: whether pension retirement ages affect the decision to return to work. They find that workers induced to retire by the relabeling reform are much more likely to return to work over the next three years than is the typical worker.

The authors note that their analysis does not allow them to separate changes in worker retirement choices due to this policy change from potential employer responses to the law change that might independent interact retirement. Disentangling these responses is a priority for future work. Overall, the paper's clear conclusion is that the labeling of particular retirement ages through the pension plan is a powerful determinant of retirement decisions.

This research was performed pursuant to grant RDRC18000003 from the US Social Security Administration (SSA) to the NBER, funded as part of the Retirement and Disability Research Consortium.