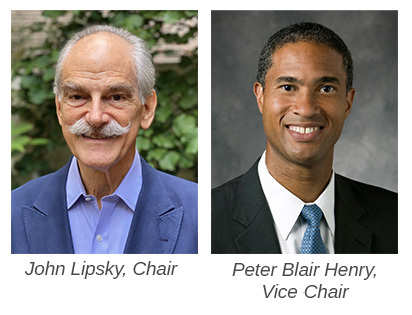 John Lipsky was elected chair of the NBER’s Board of Directors at the board’s September 14 meeting.  He succeeds Karen N. Horn, a partner in the Brock Capital Group, former CEO of Bank One, and former president of the Federal Reserve Bank of Cleveland, who had served since 2017. Lipsky, the Peter G. Peterson Distinguished Scholar at Johns Hopkins University’s Paul H. Nitze School of Advanced International Studies (SAIS) and a senior fellow of SAIS’s Foreign Policy Institute, joined the NBER board in 1998.  He served as first deputy managing director of the International Monetary Fund between 2006 and 2011. Prior to his IMF service, he was vice chair of the JPMorgan Investment Bank and served as chief economist and director of research at Chase Manhattan Bank. Lipsky is cochair of the Aspen Institute's Program on the World Economy and vice chair of the Center for Global Development.  He is a life member of the Council on Foreign Relations.  He received his BA in economics from Wesleyan University and his PhD from Stanford University.

The board elected Peter Blair Henry, the dean emeritus and William R. Berkley Professor of Economics and Finance at New York University's Stern School of Business, as vice chair. Henry’s research in international macroeconomics overturned conventional wisdom on debt relief, international capital flows, and the role of institutions in economic growth. He served as head of the external economics advisory group for then-Senator Barack Obama's 2008 presidential campaign, led the presidential transition team's review of lending agencies, and was appointed to the Presidential Commission on White House Fellows in May 2009. Henry is a member of the boards of Citigroup and Nike, and is the principal investigator of the PhD Excellence Initiative, a Sloan Foundation-funded fellowship program for minority scholars seeking admission to economics doctoral programs.  He received his PhD in economics from MIT, a BA in mathematics from Oxford University, where he was a Rhodes Scholar, and a BA in economics from the University of North Carolina at Chapel Hill, where he was a Morehead Scholar.