This project measures the macroeconomic consequences of imperfectly competitive labor markets. In his 2022 AEA Presidential Address, David Card argued that imperfect competition in the labor market is pervasive. Few firms dominate many local labor markets giving them the ability to set wages and pay workers less than their marginal product. Workers are often reluctant to search for a new job, further reenforcing firms' market power. What types of policies can improve outcomes in the labor market and what are their macroeconomic effects? This project consists of a research agenda focused on this question. This project builds on a tested quantitative framework for imperfect competition in labor markets and then extends this framework to (i) account for empirical evidence from applied microeconomic studies and our own empirical contributions and then (ii) analyze policy. The frameworks developed in this project will generate several public goods. First, the frameworks allow economists, legal scholars, and policymakers to better inform minimum wage policy, merger guidelines, and optimal taxation. Second, as part of this project's ongoing efforts to study the distributional consequences of mergers, this project will develop a new set of Census database linkages between the Decennial Census, the LEHD, and the LBD in order to study the effects of mergers across race, gender, occupation and other policy-relevant characteristics of workers. The codes for the models developed in this project will be available online, and the Census maintains a repository of our empirical analysis for all future researchers. Lastly, the models developed in this project provide a set of theoretic and computational tools that enable researchers to solve models of oligopsony quickly and efficiently.

Our agenda builds on our tested quantitative framework for imperfect competition in labor markets. We propose four sub-projects that apply and extend oligopsony models featuring rich worker and firm heterogeneity to: (i) understand the capacity of minimum wage policy to retrieve a portion of the efficiency losses due to wage setting power in the labor market, (ii) study the trade-offs for antitrust policy in terms of productivity improvements in output versus efficiency losses due to greater monopsony power, (iii) describe and analyze a novel link between the design of income tax policy and labor market efficiency while laying out a complete framework for analysis of distributional consequences of monopsony, (iv) revisit all three policies within a framework that allows for market power due to both `classical' monopsony via preference heterogeneity, and `frictional' monopsony due to search in a job ladder setting. In each case we either (i) provide new empirical facts to test our new theory, or (ii) hold the new theory accountable to the most up-to-date empirical evidence from the applied microeconomics literature, building a bridge between quantitative and empirical work. 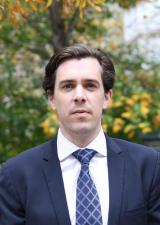