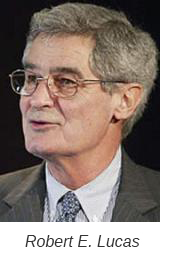 Robert E. Lucas, a Research Associate in the NBER's Program on Economic Fluctuations and professor of economics at the University of Chicago, won the Nobel Prize in Economics this year.

The Royal Swedish Academy of Sciences awarded the prize to Lucas for his "insights into the difficulties of using economic policy to control the economy." They called him "the economist who has had the greatest influence on macroeconomic research since 1970."

Lucas is the principal formulator of rational expectations theory, which shows how expectations about the future influence the economic decisions made by individuals, households, and companies. This theory assumes that people use available information about government policy when they make decisions. Thus, activist government policy to stabilize the economy, for example, could have either no effect, or could make matters worse.