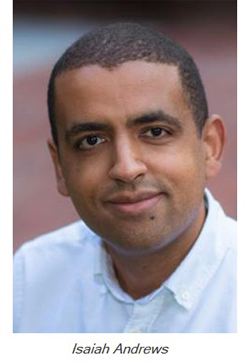 NBER Research Associate Isaiah Andrews of Harvard University is this year’s recipient of the John Bates Clark Medal, which is awarded by the American Economic Association to the American economist under the age of 40 who has made the most substantial contribution to economic thought and knowledge.

Andrews has made pathbreaking contributions in econometric theory and in the application of empirical methods in applied economics. He has provided new tools for assessing the sensitivity of parameter estimates to data inputs, explored the role of publication bias and potential corrections for it when evaluating published research, and advanced the analysis of weak identification in econometric models. The prize citation notes that he is "playing a key role in the recent turn of econometrics back toward the study of the most important problems faced in empirical research." The full citation for his award may be found here.

Andrews is affiliated with the NBER Labor Studies Program. He received his BA from Yale University and his PhD from MIT.