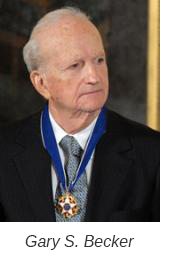 Gary S. Becker, a professor at the University of Chicago who was an NBER associate from 1957 to 1979, won the 1992 Nobel Prize in Economics. The award cited his work on such concerns as investment in human capital, family behavior, crime, and discrimination. During his tenure with the Bureau, Becker conducted much of the research for which he won his prize. His Bureau books include Essays in the Economics of Crime and Punishment (1974), edited with William Landes, and Human Capital: A Theoretical and Empirical Analysis with Special Reference to Education (1975). His groundbreaking A Treatise on the Family also was published by the NBER in 1981. Becker received his Ph.D. at the University of Chicago and has taught there continuously since 1969.