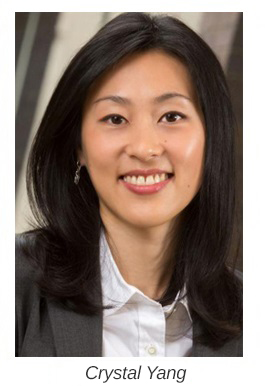 Crystal Yang, a professor of law at the Harvard Law School and a research associate in the NBER Law and Economics Program, is a new codirector of the Economics of Crime Working Group. In this role she joins Philip J. Cook of Duke University and Jens Ludwig of the University of Chicago, who along with Justin McCrary of Columbia University launched the working group in 2007.

Yang, who became an NBER affiliate in 2017, has studied a range of issues related to the criminal justice system, including bail, inter-judge sentencing disparities, racial bias, and deportation. Her research has been cited in US Supreme Court and federal district court cases.

Yang received four degrees – an AB and PhD in economics, an MA in statistics, and a JD – from Harvard University. She took leave from her teaching post in 2014-15 to serve as Special Assistant US Attorney in the US Attorney’s Office for Massachusetts.