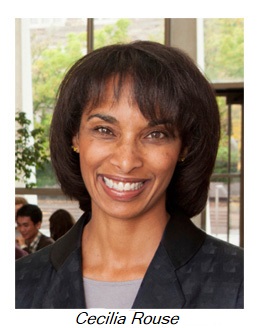 President-elect Biden has nominated Cecilia Rouse, a member of the NBER Board of Directors and an NBER research associate from 1992 until 2014, to chair the Council of Economic Advisers (CEA). Rouse is the dean of Princeton University’s School of Public and International Affairs and the Lawrence and Shirley Katzman and Lewis and Anna Ernst Professor in the Economics of Education. An expert on labor economics and education, Rouse was affiliated with three NBER programs – Children, Economics of Education, and Labor Studies – prior to becoming Princeton’s representative on the Board of Directors.

Rouse has served in Washington twice before, as a member of the CEA between 2009 and 2011, and as a staff member at the National Economic Council between 1998 and 1999. She received both her AB and her PhD in economics from Harvard University. She has spent her entire academic career at Princeton.

If confirmed, Rouse will be the 15th current or former NBER research associate to serve as CEA chair since Arthur Burns was tapped for this role by President Eisenhower in 1953.