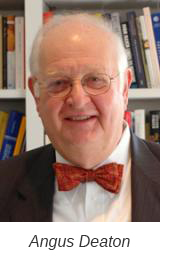 Deaton, a research associate at the NBER for the past three decades, has been awarded the 2015 Nobel Prize in Economic Sciences for his analysis of consumption, poverty, and welfare

"To design economic policy that promotes welfare and reduces poverty, we must first understand individual consumption choices," the Royal Swedish Academy of Sciences said in a statement announcing the award. "More than anyone else, Angus Deaton has enhanced this understanding. By linking detailed individual choices and aggregate outcomes, his research has helped transform the fields of microeconomics, macroeconomics, and development economics."

•   How do consumers distribute their spending among different goods?
•   How much of society's income is spent and how much is saved?
•   How do we best measure and analyze welfare and poverty?

In his more recent research, the prize committee said, Deaton has highlighted "how reliable measures of individual household consumption levels can be used to discern mechanisms behind economic development. His research has uncovered important pitfalls when comparing the extent of poverty across time and place. It has also exemplified how the clever use of household data may shed light on such issues as the relationships between income and calorie intake, and the extent of gender discrimination within the family."

Deaton's work has built bridges between theoretical and applied economics.

Since becoming an NBER research associate in 1984, Deaton has authored or co-authored dozens of working papers, the most recent of which were Suicide, Age, and Wellbeing: an Empirical Investigation, with Anne Case, and Creative Destruction and Subjective Wellbeing, with Philippe Aghion, Ufuk Akcigit, and Alexandra Roulet.

Deaton has been engaged with a broad range of NBER research activities and is affiliated with seven NBER research programs: Aging, Children, Development, Economic Fluctuations and Growth, Education, Health Care, and Public Economics.

•  Justin Wolfers in The New York Times on Why Angus Deaton Deserved the Nobel Prize
•  The scientific background of the award
•  Video of the prize announcement, as edited by The Wall Street Journal