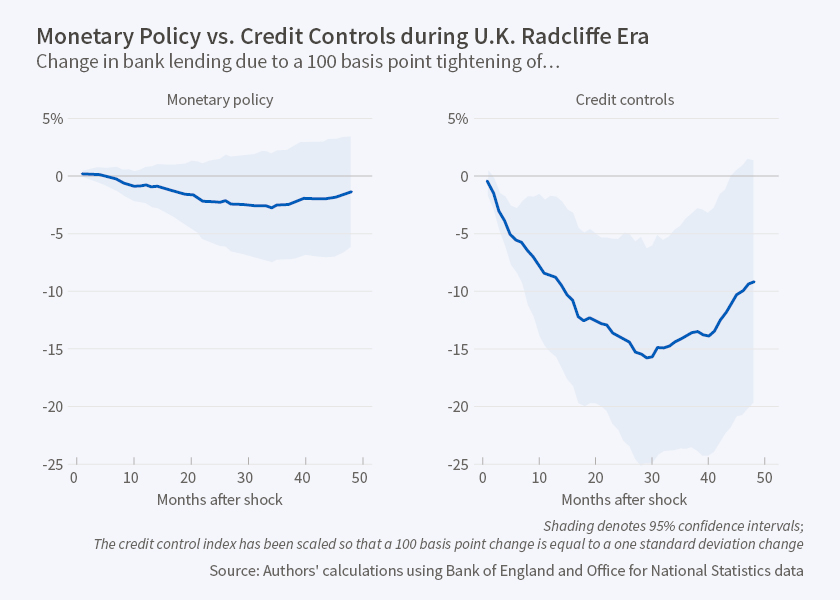 In the United Kingdom between the 1950s and 1980s, macroprudential tools modulated credit creation but were less reliable than conventional monetary policy for controlling inflation.

If post-war British history is a guide, credit controls are less effective than traditional monetary policy in controlling inflation, but they are better suited to influencing bank lending and other variables emerging as financial stability objectives. That's the conclusion of Monetary Versus Macroprudential Policies: Causal Impacts of Interest Rates and Credit Controls in the Era of the U.K. Radcliffe Report (NBER Working Paper No. 22380), a study which analyzes the Bank of England's experiments with credit controls from the early 1950s to the early 1980s. This period, which the researchers dub the Radcliffe era after Lord Cyril Radcliffe, who chaired the committee whose 1959 recommendations the central bank followed, is relevant today because many central banks are using or weighing the use of such tools.

"If a similar set of macroprudential tools were to operate as it did in the Radcliffe era, it might fairly be said that 'it does exactly what it says on the tin,' " write David Aikman, Oliver Bush, and Alan M. Taylor. Such tools "would more strongly modulate credit creation, and yet would have weaker output and inflation impacts than conventional monetary policy."

They find that monetary and credit policies had distinct effects. In the 1950s, British officials distrusted the efficacy of monetary policy. This view was reflected in the Radcliffe Report, which argued that because other financial assets could easily substitute for money, interest rate changes associated with traditional monetary policy would have limited impact. Officials preferred to complement changes in the policy rate with credit controls, such as credit ceilings, limits on installment loans, and reserve requirements, policies that are not unlike today's macroprudential policy tools.

Both monetary policy and credit controls had important effects on macroeconomic activity during the 1960s and 1970s. The authors estimate that a one percentage point rise in the policy rate resulted in a decline in manufacturing output of 2 percent after two years. Consumer prices were slower to react, staying level for 20 months, then falling by about 3 percent after four years. The trade balance improved by about 0.75 percent after two years. Bank lending, however, did not respond significantly to monetary policy changes.

By contrast, a one standard deviation tightening of credit controls reduced bank lending by around 10 percent after two years and reduced the overall credit-to-GDP ratio. Contractionary monetary policy had the reverse effect, leading the credit-to-GDP ratio to rise as GDP fell more than credit did. This tightening of credit controls was associated with a decline in manufacturing output of around 2 percent after two years. The researchers conclude that credit controls had "strong, predictable, and intuitive effects on lending."

Monetary Versus Macroprudential Policies: Causal Impacts of Interest Rates and Credit Controls in the Era of the UK Radcliffe Report