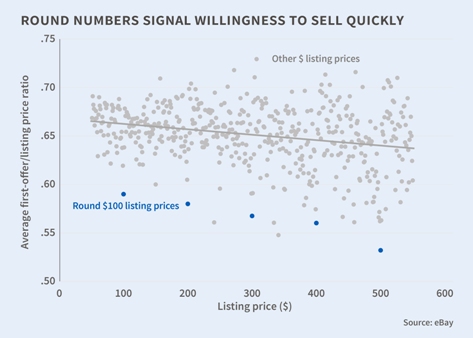 Items listed at multiples of $100 ultimately sold for 5 to 8 percent less than items with non-rounded prices, but received offers faster and were more likely to sell.

In the marketplace for ordinary goods, buyers and sellers have many characteristics that are hidden from each other. From the seller's perspective, it may be beneficial to reveal some of these characteristics. For example, a patient seller may want to signal unending willingness to wait in order to secure a good deal. At the same time, an impatient seller may want to signal a desire to sell a good quickly, albeit at a lower price.

This insight is at the heart of Cheap Talk, Round Numbers, and the Economics of Negotiation (NBER Working Paper 21285) by Matthew Backus, Thomas Blake, and Steven Tadelis. The authors show that sellers on eBay behave in a fashion that is consistent with using round numbers as signals of impatience.

The authors analyze data from eBay's bargaining platform using its collectibles category—coins, antiques, toys, memorabilia, and the like. The process is one of sequential offers not unlike haggling in an open-air market. A seller lists an initial price, to which buyers may make counteroffers, to which sellers may make counteroffers, and so on. If a price is agreed upon, the good sells. The authors analyze 10.5 million listed items, out of which 2.8 million received offers and 2.1 million ultimately sold. Their key finding is that items listed at multiples of $100 receive lower offers on average than items listed at nearby prices, ultimately selling for 5 to 8 percent less.

It is tempting to label such behavior a mistake. However, items listed at these round numbers receive offers 6 to 11 days sooner and are 3 to 5 percent more likely to sell than items listed at "precise" numbers. Furthermore, even experienced sellers frequently list items at round numbers, suggesting it is an equilibrium behavior best modeled by rationality rather than seller error. It appears that impatient sellers are able to signal their impatience and are happy to do it, even though it nets them a lower price.

One concern with the analysis is that round-number pricing might provide a signal about the good being sold, rather than the person or firm selling it. To address this issue, the authors use data on goods originally posted with prices in British pounds. These prices are automatically translated to U.S. dollars for the American market. Hence, the authors can test what happens when goods intended to be sold at round numbers are, in fact, sold at non-round numbers. This removes the round-number signal while holding the good's features constant. In this setting, they find that buyers of goods priced in non-round dollar amounts systematically realize higher prices, though the effect is not as strong as that in their primary sample. This evidence indicates the round numbers themselves have a significant effect on bargaining outcomes.

The authors find additional evidence on the round-number phenomenon in the real estate market in Illinois from 1992 to 2002. This is a wholly different market than that for eBay collectibles, with much higher prices and with sellers typically receiving advice from professional listing agents. But here, too, there is evidence that round-number listings lead to lower sales prices. On average, homes listed at multiples of $50,000 sold for $600 less.

Cheap Talk, Round Numbers, and the Economics of Negotiation