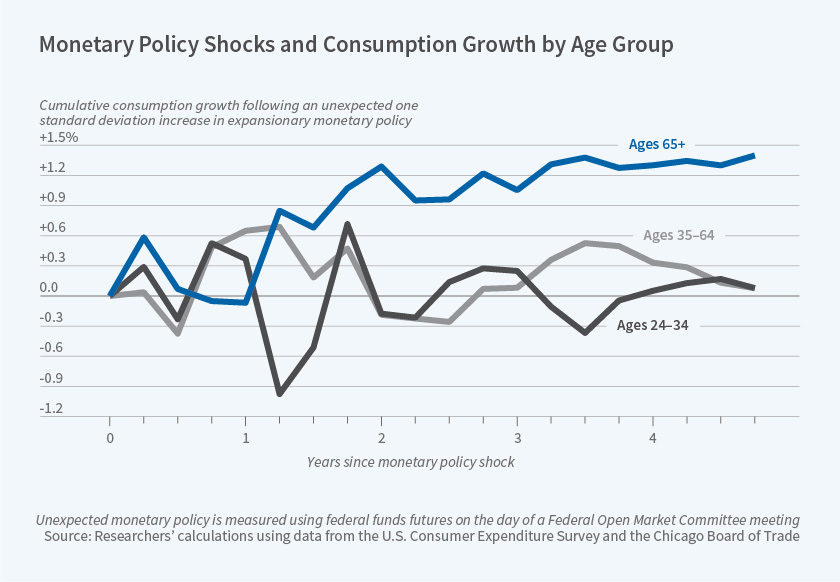 Older households are wealthier than younger ones, and their consumption spending is more sensitive to policy-induced changes in asset values.

Does monetary policy have the same effect on the consumption spending of households at various points in the lifecycle? Kimberly A. Berg, Chadwick C. Curtis, Steven Lugauer, and Nelson C. Mark explore this question in Demographics and Monetary Policy Shocks (NBER Working Paper 25970). They conclude that instruments of monetary policy that affect asset values, such as reductions in interest rates that tend to raise the value of long-term assets such as government bonds, have a greater impact on older households than on those headed by young or middle-aged Americans. On average, older households hold more wealth, and depend less on labor income to support their consumption. This makes their consumption spending increase more than that of younger households when expansionary monetary policy induces an increase in asset values.

To study how monetary policy affects consumer spending at different ages, the researchers draw on data from the Consumer Expenditure Survey. They sort, then aggregate, households into three categories by the age of the head of household: young (25–34 years old), middle-aged (35–64), and old (65+). They also use four different measures of changes in the posture of monetary policy, capturing shifts between expansionary and contractionary regimes.

The researchers suggest that differences in how households at different ages finance their consumption explain the divergence in the responses to monetary policy. To develop this argument, they draw on data from the Survey of Consumer Finances. They point out that older households are more likely to be retired, and to be financing their consumption from investment income or from the sale of accumulated assets than their younger counterparts. Older households are also much more likely to hold long-term assets, whose values are sensitive to changes in interest rates. Thus an increase in interest rates — a shift toward a more contractionary monetary policy — would reduce wealth by more for older than for younger households. This wealth effect in turn leads to lower consumer spending.

The researchers also point out that young and middle-aged households are more likely to respond to monetary-policy induced shifts in their potential consumption by changing their labor supply behavior. Variation in earnings provides a possible margin of adjustment for younger households, but not for older, retired ones, which may also affect the consumption response to monetary policy shocks at different ages.

The researchers conclude that the profound differences among age group responses to monetary policy may have long-term consequences for macroeconomic policy in the US and other developed nations where the population is aging. Aggregate demographic trends may affect the overall effectiveness of monetary policy.