How Timing of Parenting Tips Boosts Their Effectiveness for Children 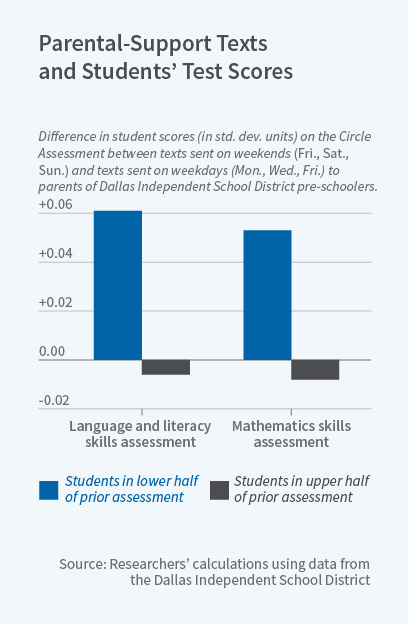 The challenges of the workweek make it difficult for parents to make effective use of tips sent by text on weekdays.

“Point out the first letter in your child’s name in magazines, on signs and at the store. Have your child try. Make it a game. Who can find the most?”

That tip is an example of parenting advice offered by an educational program that sends text messages to parents of preschoolers. The program has proven effective at boosting children’s literacy and math skills.

But when should the messages be sent? On weekends, when parents typically have more time to spend with their children? Or on weekdays, when working parents may be more receptive to outside help to make the most of their limited time with their children? Does it matter?

In When Behavioral Barriers Are Too High or Low — How Timing Matters for Parenting Interventions (NBER Working Paper 25964), Kalena E. Cortes, Hans D.U. Fricke, Susanna Loeb, David S. Song, and Benjamin N. York studied this issue. They recruited a sample of pre-kindergarten students from the Dallas Independent School District, the 14th largest public school district in the nation. They found that on average, sending the text messages over the weekend had a larger impact on student performance, but that the results varied depending on the baseline skills of the students.

Participating families were nearly all economically disadvantaged; more than two-thirds were Hispanic. Parents had their choice of receiving texts in English or Spanish. Only 28 percent of the parents had completed at least some college.

The text-messaging program was developed at Stanford University. Offered over an eight-month period coinciding with the school year, it sends three types of messages: “FACT” — information on child literacy development and best parenting practices, “TIP” — specific examples of parent-child activities, and “GROWTH” — aimed at reinforcing earlier messages and offering encouragement. Most of the activities can be worked into family routines readily, turning daily activities such as commuting and meals into learning opportunities.

Parents were randomly divided into three groups that differed only in the timing of messages. The weekday group received FACT texts on Monday, TIP texts on Wednesday and GROWTH texts on Friday; the weekend group received messages in the same order, but on Friday, Saturday, and Sunday. To tease out the impact of sending texts on consecutive days, the third group, midweek parents, received messages on Tuesday, Wednesday, and Thursday.

Student competency was measured using the Circle Assessment System at the start, middle, and end of the school year. Language and literacy skills were based on timed assessments, such as rapid vocabulary, a one-minute task gauging a child’s ability to name common objects, and phonological awareness, a five-minute drill of a child’s understanding of sounds like alliteration and rhyming. Math skills were assessed through such exercises as counting and identifying numbers and shapes.

Overall, the researchers found that the challenges of the workweek were too great for parents to make effective use of the text-messaging program. This was especially the case for parents of children who scored in the lower half of the Circle assessment at the outset of the study. The researchers conclude that it is important to factor in parents’ outside demands and their children’s skill levels when attempting to optimize learning programs.