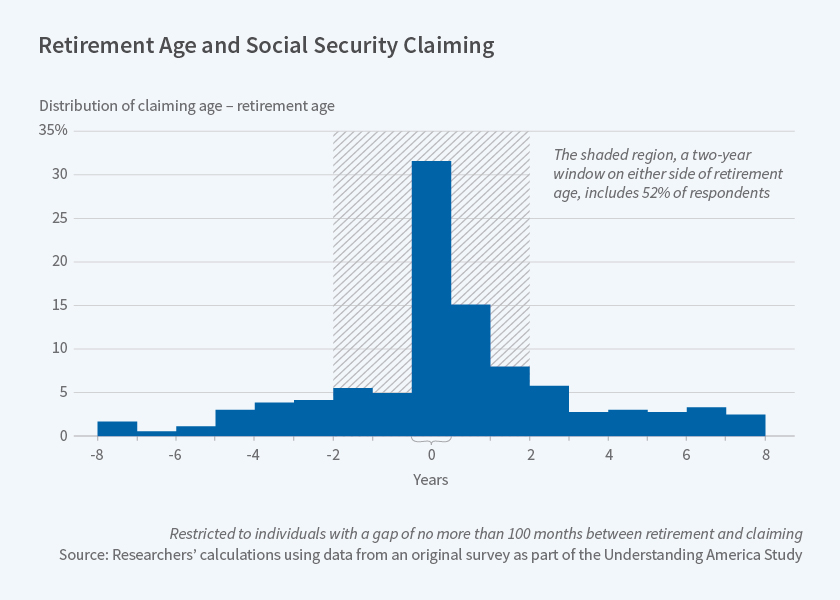 Early claimers needed money, feared benefit cuts in the future, or were in poor health. Late claimers were better educated and had IRAs or 401(k)s.

Older Americans can choose to begin receiving Social Security benefits when they reach age 62. For each year that they defer claiming, up to age 70, annual benefits grow by about 8 percent. For many individuals, delaying the start of benefits increases the expected discounted value of the total payouts that they will receive. Why, then, do most people claim within the first few years of eligibility?

This is the question explored by John B. Shoven, Sita Nataraj Slavov, and David A. Wise in Social Security Claiming Decisions: Survey Evidence (NBER Working Paper No. 23729). They find that early claimers lack liquidity and have concerns about future policy changes as well as their health.

The researchers conducted a nationally representative survey to understand individuals' claiming choices and to gauge satisfaction with those decisions. They also used information on respondents' financial literacy, knowledge of Social Security, and self-assessed health.

In their data sample, most individuals claimed benefits either at age 62, the first year of eligibility, or near the full retirement age (FRA), typically around age 65. The majority of those who were receiving benefits claimed them within a month of retirement. However almost a quarter of the sample waited until two years after retirement. Of the share claiming two years after retirement, 62 percent used employer-sponsored pensions to finance the in-between period, while others relied on savings or their spouse's income.

The researchers found that on average, primary earners, those with more education, and those with an IRA or 401(k) claimed later. They found no relationship between financial literacy or knowledge of Social Security and the age of claiming.

Almost 80 percent of those surveyed reported satisfaction with their claiming decision. Those who claimed around the FRA were more satisfied than those who claimed at age 62. Likewise, those who delayed for more than two years after retirement were more satisfied with their decision than those who did not wait. The researchers note that the high rate of claiming around the FRA, and the high satisfaction with this decision, may point to the role of social norms in the claiming process.

Over 50 percent of respondents were aware that claiming later would lead to higher annual benefits, but said that this did not influence their choice. Only 13 percent of the sample answered that they were unaware of the gains from delay.