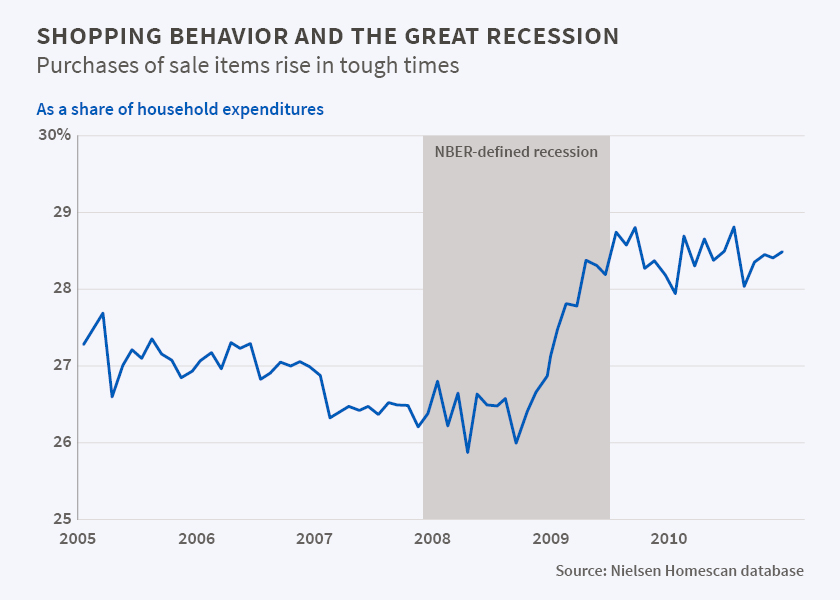 Households saved by taking advantage of coupons, sales, generics, and large sizes, but the return on time spent saving in this way declined.

During the December 2007-June 2009 recession, U.S. households in all demographics changed their food shopping behavior. On average, they devoted more time to shopping for better deals as unemployment rose. They increased their coupon usage, purchased more on sale, bought more generic goods, bought more goods in large sizes, made more shopping trips, and did more shopping at discount stores.

In The Elasticity of Substitution Between Time and Market Goods: Evidence from the Great Recession (NBER Working Paper No. 21318), Aviv Nevo and Arlene Wong show that money-saving shopping behaviors like using manufacturer coupons, waiting to buy on sale, trading down to generic goods, and buying larger sizes were either stable or declining as a fraction of overall household expenditure in the pre-recession period from 2004 to December 2007. They estimate that households could have lowered the average price paid for food by 2 to 4 percent by buying on sale, by 31 to 33 percent by using coupons, and by 5 to 11 percent by buying at discount stores. Buying generic goods would have reduced costs by 13 to 25 percent, and buying large sizes would have reduced costs by 20 to 47 percent.

Households responded to the recession by watching their budgets more closely, and by increasing their spending in each of the money-saving categories by between 1.5 to 2.0 percent of total household expenditures. But the return for the time spent in these activities, a decrease in the average marginal price paid, dropped by about 2 percent. Doubling the number of shopping trips, for example, reduced the price paid by 12 percent prior to the recession. During the recession, it reduced the price paid by about 9 percent.

Because shopping intensity increased even as the return to shopping fell, the authors estimate that the opportunity cost of time for households decreased by between 14 and 26 percent between 2008 and 2010. Increasing unemployment induced households to substitute non-market shopping work for market work.

The authors' estimates rely on data from the Nielsen Homescan database, which records household shopping behavior at the Universal Product Code level for about 325 million household purchases in 52 large U.S. metropolitan areas. Combining the Nielsen data with data from the American Time Use Survey suggests that substituting leisure and paid employment for time spent in more intense shopping may help households smooth their consumption over the business cycle. Real household median income declined by almost 10 percent from 2007-12. Real median household net wealth fell by 40 percent from 2007-13. Real household expenditure on food fell by 8.8 percent over 2008-10 relative to 2006-07, a 7.7 percent decline in quantity and a 1.1 percent decline in prices paid.

The authors conclude that the "ability to substitute between time and market expenditure can also play an important role in smoothing various non-food household consumption when households are faced with unanticipated income and wealth shocks."

The Elasticity of Substitution Between Time and Market Goods: Evidence from the Great Recession