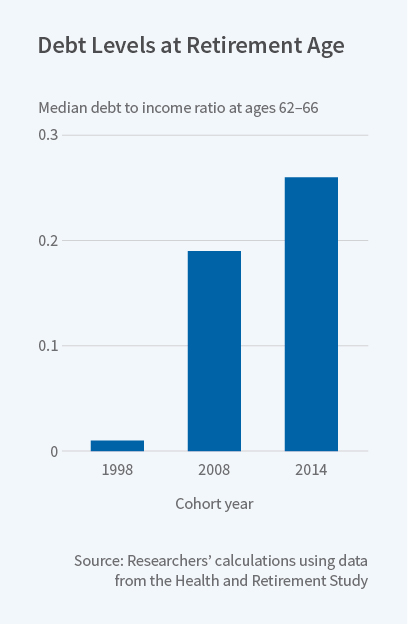 In Debt and Financial Vulnerability on the Verge of Retirement (NBER Working Paper No. 23664), Annamaria Lusardi, Olivia S. Mitchell, and Noemi Oggero show that, in recent decades, more and more Americans are entering retirement with significant debt. Debt-to-asset and debt-to-income ratios, as well as total debt, have been on the rise. Most seniors seem to be paying off their debt in retirement, but the trends reflect a higher risk of default and bankruptcy, especially for those faced with variable interest rates and falling incomes.

Drawing upon data from the Health and Retirement Study, the researchers examined the debt patterns of three different cohorts — Americans on the verge of retirement (aged 56–61) in 1992, 2004, and 2010. They also studied the debt patterns of older respondents (aged 62–66) to better analyze retirement security. To learn more about older individuals' ability to manage debt and shield themselves from financial shocks, they also analyzed responses to the 2012 and 2015 waves of the National Financial Capability Study.

Indicators of total debt— including the percentage of individuals arriving at retirement with debt, the median amount of debt, and the debt held by the top quartile and the top 10 percent — increased with each cohort. The increase in the median amount of debt was particularly sharp from 1992 to 2004, from $6,800 to $31,200. Top-quartile debt doubled between 1992 and 2004, and almost tripled by 2010.

Indicators of debt burden, such as the ratio of debt to liquid assets and the ratio of debt to total income, also increased. Primary-residence mortgage debt rose in part because people were buying more expensive homes with lower down payments; this also meant that the home represented a progressively greater percentage of total assets. Incidence and median amounts of credit card and other non-mortgage debt, including high-interest non-collateralized debt, also increased. In 2010, many more senior households held non-mortgage debt equaling or exceeding their liquid assets, suggesting missed opportunities to reduce high-interest debt. The median ratio of debt to total income jumped from 14 percent in 1992 to 45 percent in 2004, and to 50 percent in 2010, making many more households potentially vulnerable to interest-rate increases or financial shocks.

Despite the rise in debt levels, most retirement-age borrowers seemed to be servicing their debt. The researchers found that those in the 62–66 age group carried less debt than those aged 56–61, even though they carried more debt than their counterparts from previous years. They were also less likely to report carrying credit card debt, incurring late fees, and using high-cost borrowing methods such as paying only the minimum due or using their credit cards for cash advances.

Debt and Financial Vulnerability on the Verge of Retirement