Long-Term Damage from the Great Recession in OECD Countries 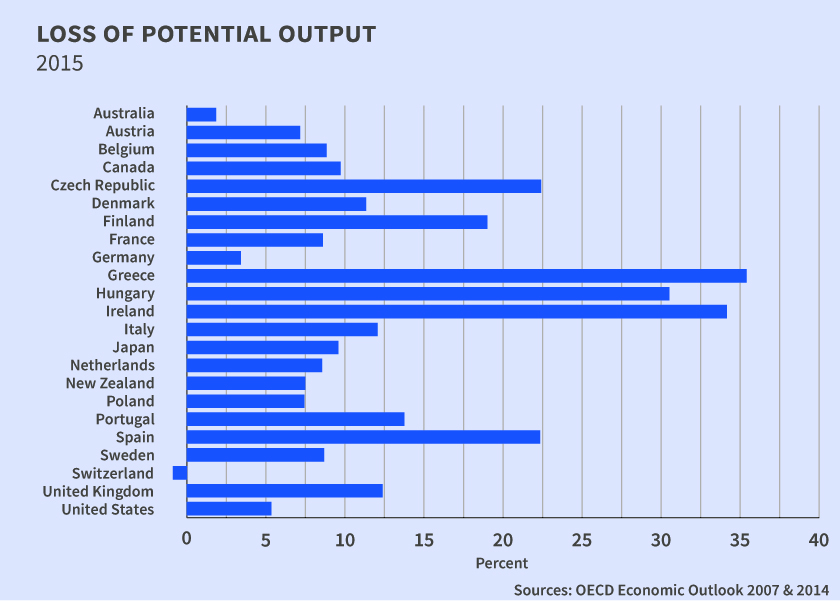 The loss of potential output relative to the pre-crisis path is 8.4 percent in 2015.

Many macroeconomics textbooks describe recessions as temporary declines in aggregate demand, when actual output drops below potential output, followed by a recovery period when output returns to potential. However, a number of studies of deep recessions around the world find that recessions have highly persistent effects on output. These effects, sometimes labeled "hysteresis," could arise because a recession reduces capital accumulation, scars workers who lose their jobs, and disrupts the economic activities that produce technological progress.

Experience since the global financial crisis and Great Recession of 2008-09 has strengthened the evidence for long-term effects of recessions, since output in many countries is still highly depressed in 2014, with many forecasters predicting little recovery in the next five years. The global financial crisis of 2008-09 contributed to national recessions of varying severity. The hardest-hit economies include those in the periphery of the euro area, which experienced severe banking and debt crises. At the other extreme, Australia was almost unscathed because of factors including fiscal stimulus and strong exports to Asia.

Ball finds that the recent recessions have had dire effects on economies' productive capacity, as measured by OECD and IMF estimates of potential output. In most countries, the fall in potential relative to its pre-crisis trend has been almost as large as the fall in actual output. Consequently, the countries with the deepest recessions have also experienced the greatest long-term damage. By aggregating the 23 countries in his sample, the author finds that the loss of potential output relative to the pre-crisis path is 8.4 percent in 2015. To appreciate the size of this loss, note that Germany accounts for 8.2 percent of the aggregate economy. The total damage from the Great Recession is slightly larger than the loss if Germany's entire economy disappeared.

Ball suggests that recessions sharply reduce capital accumulation, have long-term effects on employment - largely through lower labor force participation - and may slow the growth of total-factor productivity. This last effect is poorly understood. One possible mechanism is a decrease in the formation of businesses with new technologies.

A pressing question is whether hysteresis effects are reversible. Perhaps a strong economic expansion could push potential output back toward its pre-crisis path as procyclical investment increases the capital stock and plentiful job opportunities increase workers' attachment to the labor force. Ball concludes that further research is needed on the mechanisms and magnitude of long-run hysteresis.

Long-Term Damage from the Great Recession in OECD Countries