Measuring the Impact of Mobility Restrictions on Virus Transmission 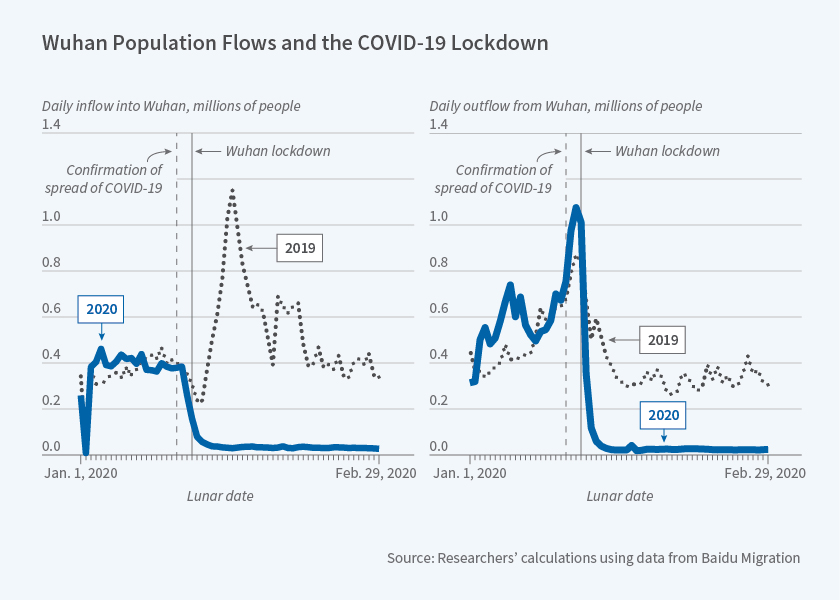 There would have been 65 percent more cases of COVID-19 in the 347 Chinese cities outside Hubei province had Wuhan not been locked down on January 23.

Human mobility contributes to the transmission of infectious diseases that threaten global health. A principal response of many countries to the COVID-19 pandemic has been to impose restrictions on people’s movements. However, such policies are controversial because they have a negative economic impact, and they also limit personal freedoms. To strike the right balance, it is essential to understand the effect of lockdowns on the spread of pandemics.

In Human Mobility Restrictions and the Spread of the Novel Coronavirus (2019-nCoV) in China, (NBER Working Paper 26906), Hanming Fang, Long Wang, and Yang Yang quantify the effectiveness of human mobility restrictions on efforts to control the spread of the disease and reduce health risks in Hubei province, the area of China in which the virus emerged.

The lockdown of 11 million people in the city of Wuhan on January 23, 2020, was at that point the largest quarantine in public health history. The researchers explore how the lockdown affected population movement and how population flows among Chinese cities affected virus infection rates in cities other than Wuhan. They estimate how many COVID-19 cases elsewhere in China were prevented by the Wuhan lockdown, and investigate whether social distancing policies in destination cities effectively reduced the spread of infection.

The researchers utilize datasets from Baidu Migration on population movement, as well as daily city-level data on the numbers of confirmed COVID-19 cases, recovered patients, and death tolls from the Chinese Center for Disease Control and Prevention. They focus on the sample period of January 1–February 29, 2020.

They employ difference-in-differences estimation strategies to disentangle the effect of the lockdown from three confounding effects. The first involves the fact that the virus broke out right before the Chinese Lunar New Year, on January 25. This holiday, also known as “Spring Festival,” is associated with the largest internal migration of the year in China. The second confounding effect, the “virus effect,” is the precautionary activity of individuals in response to the COVID-19 outbreak, as even without a lockdown, they curtailed their public movements and tried to avoid virus exposure. Finally, for Wuhan and nearby cities, the researchers account for a possible “panic effect” which could have led to increased population outflow from the outbreak’s epicenter and decreased inflow to it.

After controlling for these three effects, the researchers conclude that the Wuhan lockdown reduced inflow into the city by 77 percent, outflow by 56 percent, and within-Wuhan movement by 54 percent. They find that the lockdown significantly contributed to reduction in the total cases of infection outside of Wuhan, even with the social distancing measures later imposed by other cities.

The results demonstrate the role human mobility restrictions can play in containing the spread of contagious disease, and suggest that their imposition can help reduce the peak number of cases and allow stressed medical systems a chance to better cope with the flow of new cases.