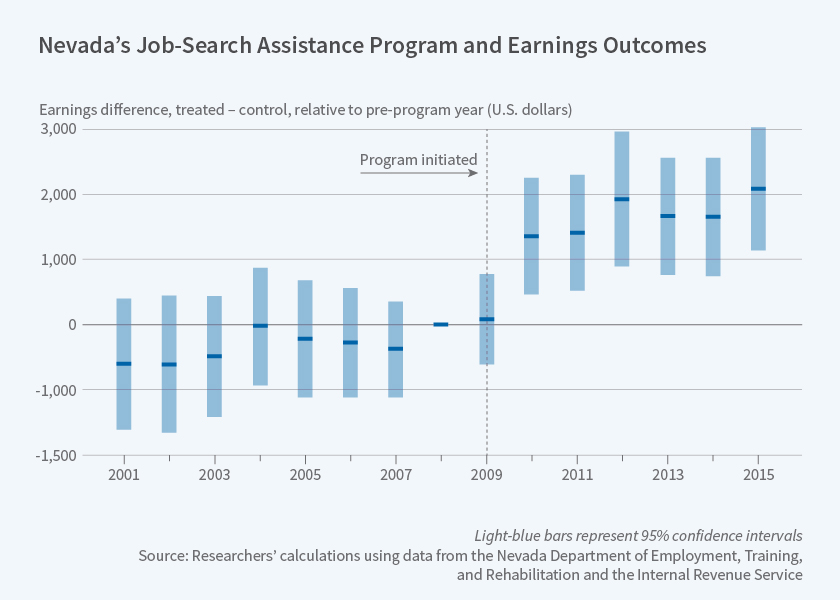 In late 2009, the state of Nevada provided individualized job-search assistance to randomly selected recipients of unemployment insurance (UI). Of the 32,751 people receiving UI benefits during this period, 4,673 were offered assistance. Those chosen to receive individual assistance were sent letters asking them to attend meetings scheduled up to a month after the date they filed for UI; they were told that failing to show up would end their benefits.

At the meetings, interviewers reviewed and evaluated recipients' job-search activity. Those who did not meet the search requirements of Nevada state law were removed from the UI rolls; those who were searching received personalized job counseling, including an assessment of their occupational skills, help developing a search plan and résumé, and referrals to local employers.

In Long-Term Effects of Job-Search Assistance: Experimental Evidence Using Administrative Tax Data (NBER Working Paper No. 24422), Dayanand S. Manoli, Marios Michaelides, and Ankur Patel compare the subsequent experience of those who received personalized assistance with that of other UI recipients who did not. They analyze tax return data spanning the 2001–15 period. While many previous studies have examined the short-run effects of job placement programs on employment, this is one of the first that can track program participants for an extended period of time.

The researchers find that the assistance program increased employment by more than four percent over the subsequent six years for those randomized into the program relative to those who were not. The employment rate of participants in the year after the intervention was 8 percent higher than that of the non-assisted group. This effect declined somewhat over time, but remained in the 4 to 7 percent range over the subsequent five years. As a result, the program increased participants' earnings in the range of 11 to 14 percent over the entire six-year follow-up period. Average W-2 wages for the assisted group were $2,076 higher than those for the non-assisted group in 2010 and $2,369 to $2,800 higher in each of the subsequent years. Average earnings conditional on employment averaged $1,500 more for the assisted group. Total UI benefits paid out from 2009 through 2011 were $818 lower for those in the assistance program, about four times the cost of the job-search assistance program. There was no difference between the assisted and non-assisted groups in the amount paid in UI benefits after 2011.