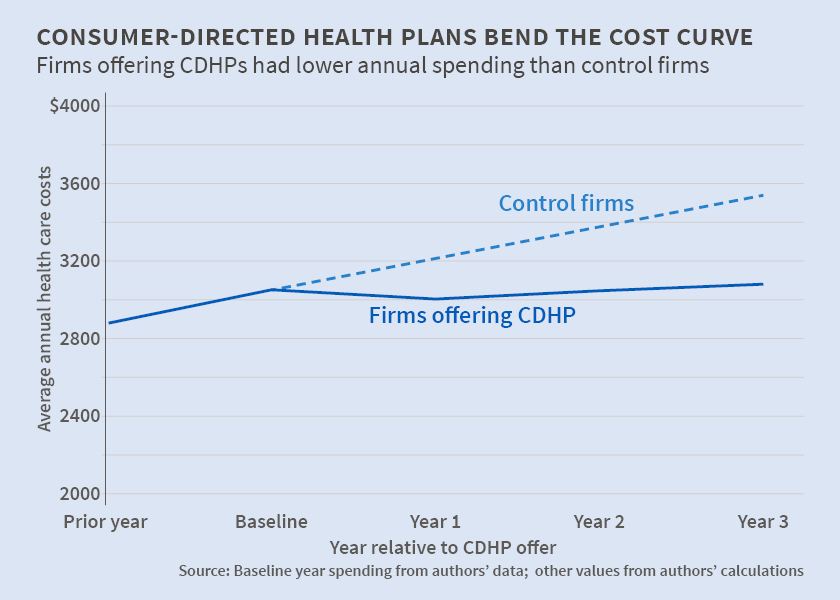 Total annual health spending was defined as the amount paid by the employer, the insurer, and the employee. Most of the spending reduction occurred in outpatient care and pharmaceutical spending. It was not accompanied by increases in emergency department or inpatient spending. The reduction in care utilization is consistent with insured individuals being price-sensitized when faced with relatively high prices at the point of service in consumer-directed health plans.

Firms offering consumer-directed plans were recruited from clients of Towers Watson. Firms offering traditional plans were recruited from among employers contributing to MarketScan, a dataset maintained then by Thomson Reuters and now by Truven Health Analytics. They were selected to match approximately the geographic region, size, and industry distribution of the firms with consumer-directed plans. Data for all firms included employee age, gender, marital status, and number of children, along with individual enrollment and claims data, information on individual accounts, employer contributions, and plan deductibles.

This kind of comparison assumes that both sets of firms face the same health expenditure growth trend. One challenge is that the larger firms in the study are dynamic entities with multiple locations. The health, and health spending habits, of their employees can change as their overall employee profile changes. The authors addressed this by constructing individual weights designed to ensure that each firm's sample employee composition characteristics in each succeeding year roughly matched those of the sample in the initial year.

Consumer-directed health plans are expected to reduce spending because they combine employee-specific accounts that are funded on a pre-tax basis with standard health coverage that has a higher deductible and a lower premium than traditional plans. Either the employer or the employee can contribute to the em-ployee account and balances roll over from year to year. In this sample, average consumer-directed deductibles were roughly $1,400. Average traditional coverage deductibles were slightly more than $100. Median employer contributions to employee accounts were $500 a year. Funds in the employee account can be used to pay for out-of-pocket expenses that are part of the health insurance plan but that are not covered, for example for deductible payments. If an employee's account is empty, he is responsible for paying his deductible amount.

In theory, the incentive to control spending varies with consumer-directed account design. Health Reimbursement Accounts, which made up almost 60 percent of the consumer-directed accounts in the first offer year and 75 percent in the third, are owned by employers. Unused funds accumulate from year to year but revert to the employer when an employee changes firms or retires. Funds in Health Savings Accounts are owned by the employees. They follow their owners from job to job, across insurers, and into retirement.

The authors conclude that employers offering consumer-directed health plans spend less, but stress that further research is needed to determine optimal benefit design, as the extent to which reductions are due to patients foregoing needed care is unknown. They caution that their results are limited to large employers and families with at least one full-time worker.

Do “Consumer-Directed” Health Plans Bend the Cost Curve Over Time?