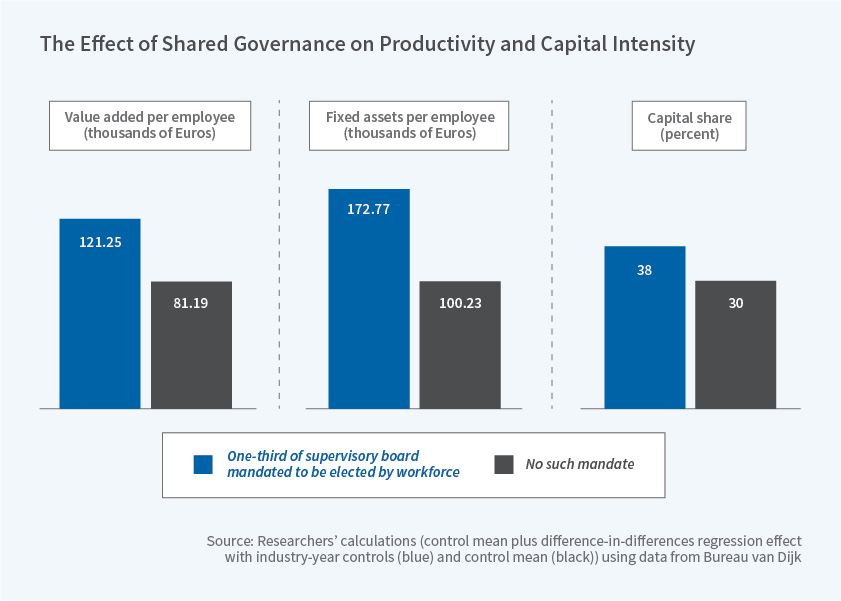 German firms with shared governance had 40 to 50 percent larger long-term capital stocks than firms without workers on the board, with comparable wages.

German corporations with labor representation at the board level tend to accumulate more capital than their counterparts. This finding rejects the view that labor representatives “hold up” management for higher wages, which come at the expense of investment spending. “Overall, shared governance does not appear to lower shareholder profits … or … to reduce firms’ external finance capacity,” Simon Jäger, Benjamin Schoefer, and Jörg Heining conclude in Labor in the Boardroom (NBER Working Paper 26519).

The researchers study a 1994 corporate governance reform in Germany that allowed newly created corporations with fewer than 500 employees to dispense with the long-held tradition of one-third labor representation on their supervisory boards (a form of shared governance, or codetermination). The supervisory board oversees and decides the compensation of the executive board, which manages the day-to-day operations, and is also involved in larger financial decisions. Companies incorporated before the reform, which already had labor representation, were required to keep it. The researchers compared corporations formed during the two years before the reform with those formed within the two years after it.

There were sharp differences: women had a higher probability of joining boards with labor representation than those without it, while the share of board members with nobility titles went down. The survival rate of the firms was unaffected, whether they had shared board representation or not.

The researchers did not find any evidence that labor representation reduced owners’ investments in the firm or reduced profits. Firms with shared governance actually had capital stocks that were between 40 and 50 percent larger than firms without workers on their supervisory boards. The greater capital stock was not associated with reduced employment; rather, there was an average 12 percent increase in the share of sales produced in-house.

Even with slightly more workers, the increase in fixed capital meant a higher capital to labor ratio for companies with shared board representation. The capital share rose by a large 8 percentage points.

What about wages? Theories of rent extraction posit that if labor gets more power on boards, it will grab more for itself in the form of wages. But the researchers found only slightly higher pay at companies with shared board representation than at those without, and in general they could not distinguish the two. They conclude that, in wage negotiations, workers at shared board representation firms either did not have more bargaining power, or they did not exercise it. The estimates for both sets of companies suggested that a 20 percent rise in value-added per worker would raise worker pay by only about 2 percent.

The researchers reflect on various potential mechanisms behind these results. One interpretation is that when provided with board representation, workers may push for more capital investment because they link the company’s long-term health with job security. Alternatively, the institutionalization of regular contacts between labor and management may encourage more cooperation and, thus, more long-term investments, perhaps on both sides.

The researchers also discuss alternative interpretations in which the increased investment goes against shareholder preferences and may lower rather than raise economic efficiency. For example, collusion between management and workers may lead cash flow to remain inside the firm and be channeled towards “empire building.” While they find no evidence of decreased profits, the researchers note that the datasets do not include dividend payouts.

Labor in the Boardroom