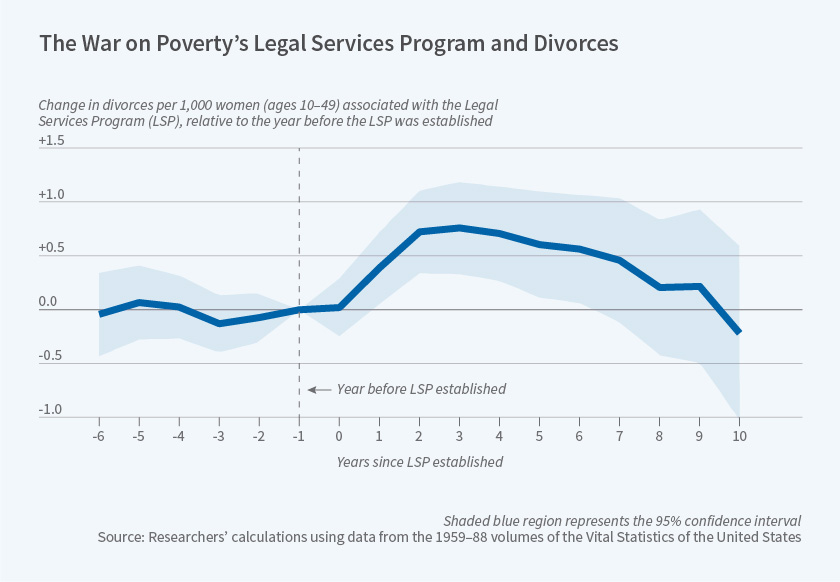 The LSP sharply increased the availability of free legal consultation for low-income households. LSP attorneys could assist with divorce filings — about one-fifth of LSP attorneys' 282,000 cases in 1968 involved divorce — or access to welfare benefits, which were typically only available for single parents under the Aid to Families with Dependent Children (AFDC) program. By supporting households' efforts to claim benefits for which they were eligible, the efforts of the LSP reinforced program expansions that were part of the Great Society initiative.

To estimate LSP's impact, the researchers digitized county-by-year data on family structure outcomes and welfare participation between the 1960s and 1980s from a range of sources, which yielded a main sample comprising 2,683 counties covering 94 percent of women in the US. They then study marriage, divorce, and AFDC participation outcomes in the 251 counties where the LSP was rolled out between 1965 and 1975 ("treated counties") and in non-LSP counties.

Divorce rates rose after the LSP arrived in a county, with an average 5.5 to 7.7 percent increase over the baseline of 9 divorces per 1,000 women ages 10–49 five years after LSP establishment. Over time, the difference faded, disappearing after around eight years.

Welfare participation increased steadily after the establishment of an LSP in a given county, as LSP attorneys encouraged people to apply for benefits and sued local authorities over eligibility restrictions. The researchers estimated that there were between 6.6 and 10.3 additional AFDC cases per 1,000 women, which stabilized after nine years. The researchers estimate that the establishment of LSPs explains 18 to 31 percent of the rise in welfare cases in treated counties.

The rollout of the LSP is also associated with a steep increase in non-marital births, which, like the welfare enrollment increase, levels off after eight or nine years following an initial rise of between 6.5 and 12 percent over the baseline mean of 5.2 non-marital births annually per 1,000 women. This suggests that the LSP explains 36 to 41 percent of the growth in non-marital birth rates in the 50 treated countries that were observed through 1988. This was not because unmarried women were having more children, they note, but rather because marriage rates were falling.

The divorce effects of LSPs were larger in states that implemented no-fault divorce, which made it easier to initiate divorces. In states where married women were allowed to get welfare, non-marital birth effects were smaller, since women did not have to forego marriage or get divorced in order to retain benefits. The researchers note that although the 1960s were a time of social and cultural upheaval, racial uprisings, sex ratios, falling male earnings, and the simultaneous launch of other War on Poverty programs cannot explain the changes in family structure and welfare participation they document. "Our findings support the claim that cash welfare restricted to single parents, when recipients can access it, affects family structure," they conclude.

Changes in Family Structure and Welfare Participation Since the 1960s: The Role of Legal Services