Why Are STEM Doctoral Completion Rates Lower for Women? 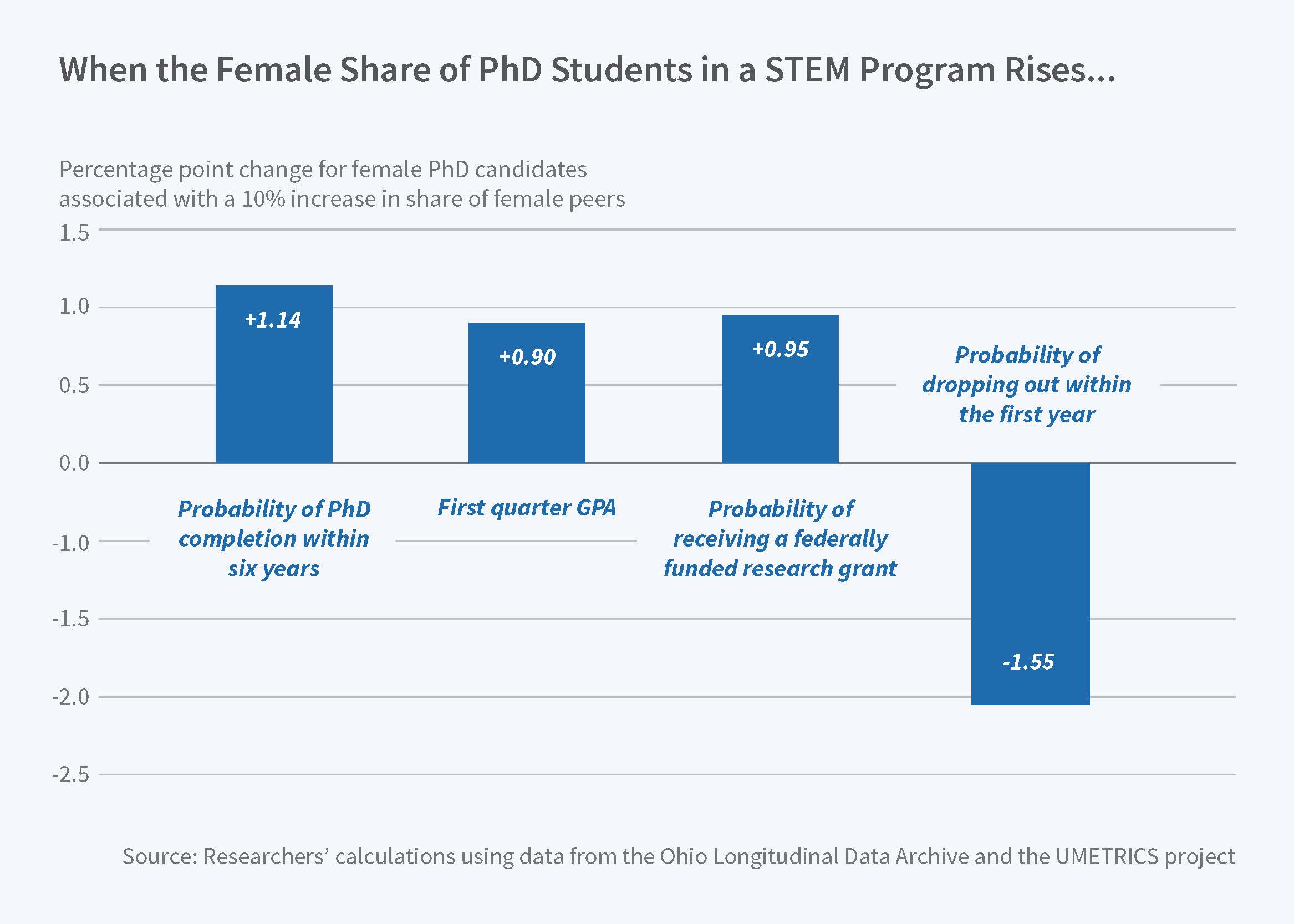 Women entering PhD programs in which they have no female peers are 12 percentage points less likely to graduate than men entering the same program.

More than half of all doctoral graduates in the United States in 2016 were women, but women accounted for just 23 percent of engineering and 26 percent of mathematics graduates.

In Nevertheless She Persisted? Gender Peer Effects in Doctoral STEM Programs (NBER Working Paper No. 25028), Valerie K. Bostwick and Bruce A. Weinberg explore differences in PhD class composition in an attempt to explain why women are underrepresented in science-related fields. They find that women who enter PhD programs in which they have no female peers are 12 percentage points less likely to graduate than men in the same program. A one standard deviation increase in the percentage of female students (a 20.7 percentage point increase) closes that gap in the probability of on-time graduation by 4.6 percentage points. The researchers use data on individual PhD program classes (cohorts) for public universities in Ohio over the period 2005-09. The data include information on transcripts and funding for each student, allowing the researchers to follow individual outcomes over time. They focus on degree programs in science, technology, engineering, and mathematics (STEM). For each STEM degree program, they calculate the share of each cohort that is female and then estimate the impact of that share on completion rates.

In STEM cohorts with no female peers, women are 12 percentage points less likely to graduate within six years than their male counterparts. This disparity in progress-toward-degree is largely due to different progression rates early in the doctoral programs. Women in the first year of a PhD program are 10 percentage points more likely to drop out before the second year if there are no other women in their cohort. A 10 percentage point increase in the share of women within a cohort increases the probability of on-time graduation for a female student by 1 percentage point.

Women in cohorts with no female peers have worse first-term grades than men, compared to women in mixed-gender programs. However, this accounts for less than a quarter of the differential graduation rates between females and males. Women in a heavily dominated male cohort are no less likely to obtain research funding. Moreover, the lower graduation rates do not appear to be driven by any effects of the gender composition of faculty or older cohorts. The researchers hypothesize that graduate school cohorts with a relatively large share of women are more likely to have a positive climate for women, and that this climate increases the likelihood of program completion.