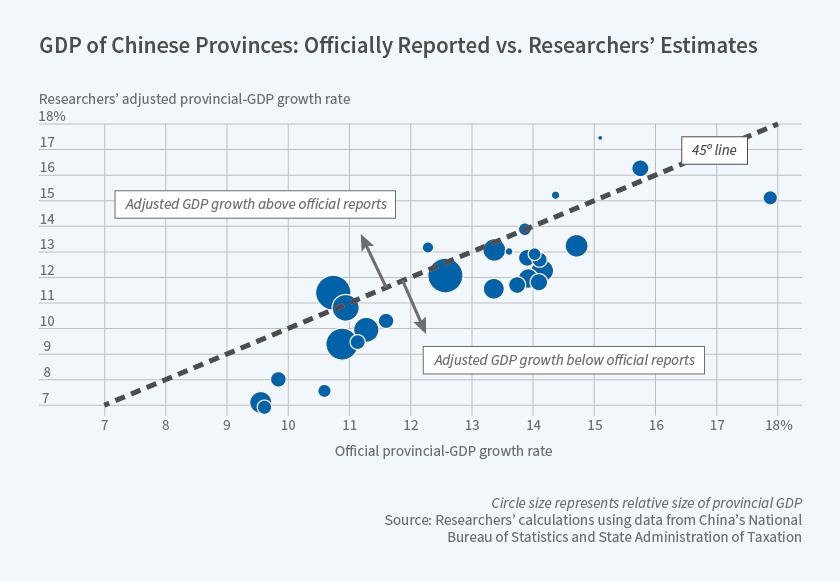 Local governments in China have incentives to over-report economic activity and the sum of local GDP estimates often exceeds the national alue.

Local officials in China have an incentive to inflate their reports of investment and overall economic activity because they are rewarded for meeting economic growth targets. China’s National Bureau of Statistics (NBS) has recognized the overstatement of local reports of output but has no power to control the actions of local governments. Instead, the NBS uses the local governments' data but adjusts these numbers to arrive at the official number for Chinese national GDP. The sum of local GDP estimates exceeds the value of national GDP estimates by between 5 to 6 percentage points between 2003 and 2016.

Investigating this discrepancy, Wei Chen, Xilu Chen, Chang-Tai Hsieh, and Zheng Song find that the corrections made by the NBS to numbers provided by local governments were roughly accurate until 2008. After that, the corrections seem too small, and they appear to fall further behind over time. In A Forensic Examination of China's National Accounts (NBER Working Paper No. 25754), they conclude that even after the adjustments made by the NBS, the growth rate of officially reported national GDP growth from 2010 to 2016 is overstated by about 1.8 percentage points.

The researchers explore the process by which economic statistics are constructed at both local and national levels. On the production side, statistical agencies at both levels estimate output using a census of state- and privately owned firms. Since 2008, the census has not reported firms' value added, so local statistical bureaus impute this information using survey data on gross output. When the researchers applied the imputation procedure used by these governments to data for 2012 and 2013, they obtained estimates of value added that exceeded the official numbers. On the expenditure side, local investment is based on reports of local investment projects by local governments.

To construct their own measures of GDP and other economic aggregates, the researchers use other data sources that are available to government statistical agencies but that are not currently utilized. For example, they use data on value-added tax payments by firms in manufacturing, retailing, and wholesale trade to estimate value added in these sectors. They also examine a number of other economic indicators that are unlikely to be manipulated by local officials. Their resulting alternative estimates of both local and national GDP suggest that local over-reporting of output has increased since 2008, while the NBS has applied a constant correction factor.

The researchers find the latest disparities in estimates of industrial output, which affects GDP measurement, and in investment. They conclude that actual GDP growth from 2010 to 2016 was about 1.8 percentage points lower than the growth rate calculated from the official numbers. They also conclude that in 2016, the investment and savings rate was about 7 percentage points lower than what official reports suggest. The researchers' estimates suggest that growth in recent years was lower than what official statistics indicate, the return to capital is higher than these data indicate, and that consumption plays a larger role in Chinese growth than official data suggest.