Evaluating the Role of Credit Ratings in the 2008 Crisis 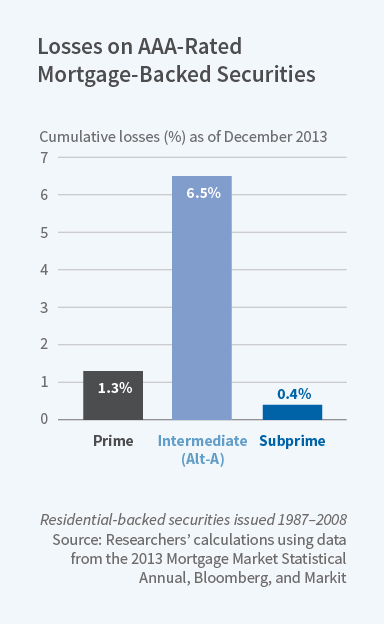 Falling prices for mortgage-backed securities contributed to the 2008–9 financial market turmoil, but the AAA-rated subprime segment performed better than other market segments.

New evidence on the performance of non-agency residential mortgage-backed securities (RMBS) during the 2007–13 period casts doubt on the ubiquitous claim that the 2008 financial crisis was triggered by over-extension of mortgage credit and a failure of rating agencies to recognize the associated risks to investors.

Non-agency RMBS are backed by mortgages that do not qualify for guarantees issued by agencies of the U.S. government. Examples of such loans are "jumbo" mortgages that exceed the value limit for guarantees, those with a high loan-to-value ratio, and those lacking the documentation needed for agency backing. From 1987 through 2013, various lenders issued about $5.8 trillion in non-agency RMBS. A common narrative for the start of the financial crisis suggests that credit agencies downplayed the riskiness of RMBS, drawing in lenders who did not appreciate their intrinsic risk. Some also claim that ratings were less accurate in the subprime market than elsewhere.

In Mortgage-Backed Securities and the Financial Crisis of 2008: A Post Mortem (NBER Working Paper No. 24509) Juan Ospina and Harald Uhlig examine new data on the prices of non-agency RMBS. They find that total losses in the non-agency RMBS market through December 2013 were less than $350 billion, about 6.5 percent of their pre-crisis market value. Subprime AAA-rated securities performed well compared to securities in other market segments. Some categories of non-agency RMBS generated rates of return between 2.4 and 3.3 percent at a time when 10-year Treasuries yielded between 3 and 4 percent. These findings challenge the view that improperly rated RMBS were a major contributor to the financial crisis.

The researchers study 8,615 deals to securitize non-agency RMBS from 1987 through 2008. The securities created by those deals are tracked through 2013. Almost 87 percent of the securities issued were AAA-rated. These had almost no losses before 2003. In contrast, the cumulative losses for securities issued between 2006 and 2008 were around 2.3 percent for the entire portfolio of AAA-rated non-agency RMBS, compared to their originally promised payouts.

While one might consider these losses substantial relative to historical losses for that rating class, the subprime AAA-rated segment outperformed the AAA-rated market as a whole. The subprime AAA segment experienced a principal-weighted loss rate of 0.42 percent on average, and there was no increase in loss rates for subprime-based AAA securities issued in 2006-8. Losses were higher in other rating segments. For example, in the $53 billion non-investment grade, non-agency RMBS market, which comprised about 1 percent of the total non-agency market, the loss rate exceeded 50 percent.

The researchers find that 75 percent of the AAA-rated securities had practically no losses until the end of 2013 and thus, in hindsight, deserved their rating so far. They find more evidence of inflated ratings for weaker securities. For securities with a rating of A or below, they conclude that there was a high fraction of inflated ratings. They point out, however, that these securities represented only a small part of the RMBS market.

Mortgage-Backed Securities and the Financial Crisis of 2008: a Post Mortem