The Size of the Prize Affected Technology Innovation Competition 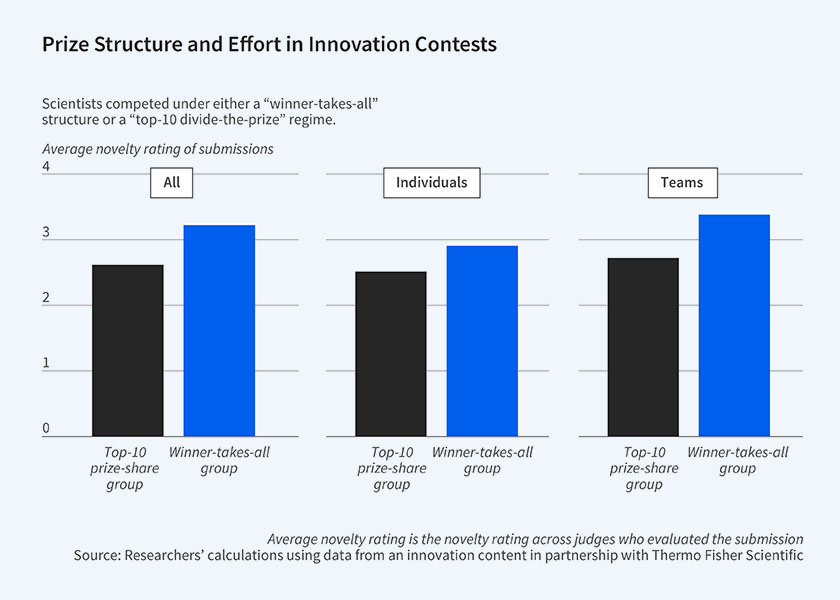 Which is the more cost-effective way to spur innovation: to offer a single large prize, or to offer a set of smaller prizes with the same total value divided among multiple winners? In The Effects of Prize Structures on Innovative Performance (NBER Working Paper 26737), Joshua Graff Zivin and Elizabeth Lyons find that the winner-takes-all, single prize scheme stimulates greater risk-taking and thus more boundary-pushing ideas. They also find that this effect is more pronounced when the innovations are being developed by teams, which can pool a wide variety of skills and experiences, than by individuals.

The researchers partnered with Thermo Fisher Scientific, a large multinational technology firm, in a randomized control trial that involved a contest to solicit proposals for how small health-care providers and laboratories in Mexico could share access to expensive technological equipment.

The contest was open to non-management employees of the firm and of other technology firms and freelancers in the Baja California region, as well as to STEM students at local universities. The researchers designed the study “to observe differences in effort and performance across prize structures among statistically identical populations.”

Potential contestants were required to complete a survey that asked for demographic information as well as some data on their professional expertise. It also assessed attitudes toward risk, ranked on a scale from 1 to 5. The contest attracted 184 participants. Each entrant had the choice of competing on a team of up to three people or as an individual. Of the group, 93 decided to go it alone.

Next, the competitors were divided into two equal-sized groups and told to which prize scheme they had been randomly assigned. Under the first, one winner or winning team would receive $15,000; under the second, the $15,000 would be divided among 10 winners, with awards ranging from $6,000 for first place to $600 for tenth. Participants were told that they would be judged relative to others facing the same prize structure.

All submissions were randomly assigned to judges. The judges were not informed of the prize structure under which the submitters were competing. Submissions were ranked on overall quality and project novelty. Quality was assessed in five equally weighted areas: relative novelty compared with existing products; functionality; user friendliness; scope of applicability; and success in fulfilling project requirements. With respect to the overall quality measure, prize structure did not matter: the overall quality of submissions was the same for each prize group, about 2.5 out of a possible 5.

Project novelty was also assessed on a 1–5 scale with 5 as the maximum. The lowest score was given to proposals viewed as “already available in the target market,” and the highest to those that were “so creative judges are almost sure no one else has thought of a similar idea.” The researchers found that projects submitted under the winner-takes-all structure “were significantly more novel than those made under the multiple prize structure.” Teams operating under the winner-takes-all program submitted projects that scored 25 percent higher on novelty rankings than those under the multiple-prize structure.

The Effects of Prize Structures on Innovative Performance