Women from Elite Colleges Earn More Because They Work More 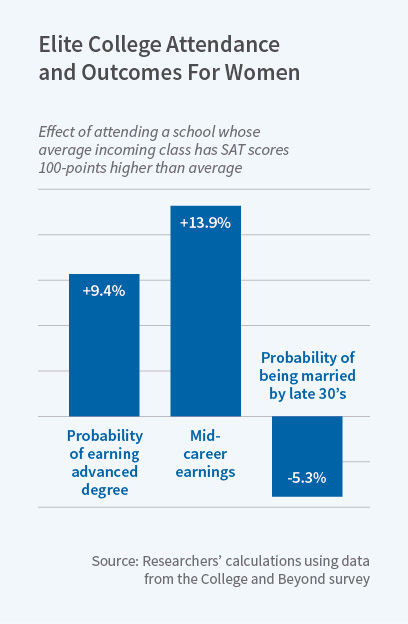 The effect of a more selective school on wages conditional on working is small compared to the effect on the likelihood of working.

There is fierce competition for admission to the country's most selective institutions of higher education. Whether attending one of these institutions substantially increases the future earnings of prospective students is a difficult research question because, on average, the characteristics of the students who attend more selective schools differ from those of students who matriculate elsewhere.

In Elite Schools and Opting-In: Effects of College Selectivity on Career and Family Outcomes (NBER Working Paper 25315), Suqin Ge, Elliott Isaac, and Amalia Miller provide new evidence on how college selectivity affects career and family outcomes among both full-time and part-time workers and nonworkers. They explore how one element of a college's value added — a student's future earnings — is affected by a school's selectivity.

The researchers use data from the College and Beyond survey, which includes survey responses from students as well as administrative student records and other supplemental data for students at 34 selective U.S. colleges and universities. They analyze career and family outcomes for men and women in their late 30s who entered college in 1976. Their research strategy involves matching students based on their applications, admissions, and rejections, while controlling for individual factors such as their high school records, SAT scores, and parental income. Thus the comparison is in effect between students with similar backgrounds who applied to and were accepted or rejected by the same range of schools and one went to a more selective school and the other went to a less selective one. This approach is less likely to be confounded by student differences than a simple comparison of students who did, and did not, attend a very selective school.

The researchers find that school selectivity, as measured by the average SAT scores of the school's admitted students, is correlated with post-college earnings for some groups, even after controlling for student characteristics. Attending a more selective institution increases earnings by 7.1 percent on average. The effect is much larger for women (13.9 percent) than for men (1.1 percent). The researchers cannot reject the possibility that there is no effect for men.

The effect of a more-selective school on women's subsequent earnings is driven largely by an increase in labor force participation, not in earnings conditional on working. All else equal, a woman who attends a school with a 100-point higher average SAT score is 2.8 percent more likely to work. They find no statistically significant effect for men. In addition, attending a more selective school increases the likelihood of a woman obtaining an advanced degree by 9.4 percent. There is no comparable effect for men.

College selectivity is also associated with family outcomes. Married women with children are the group for whom the differential between those who attended elite schools and other schools is largest.

Attending a more-selective institution is associated with a 3.9 percentage point lower marriage rate for women, but does not appear to matter for men. Spouses of women who attend more selective schools are 8 percentage points more likely to have an advanced degree, but their earnings and labor market participation rates are comparable to the spouses of women who attend less selective colleges. The researchers do not find any effects of college selectivity on the probability of having children for either men or women.

Elite Schools and Opting In: Effects of College Selectivity on Career and Family Outcomes