Stable Options Grants: An Explanation for the Rise in CEO Pay 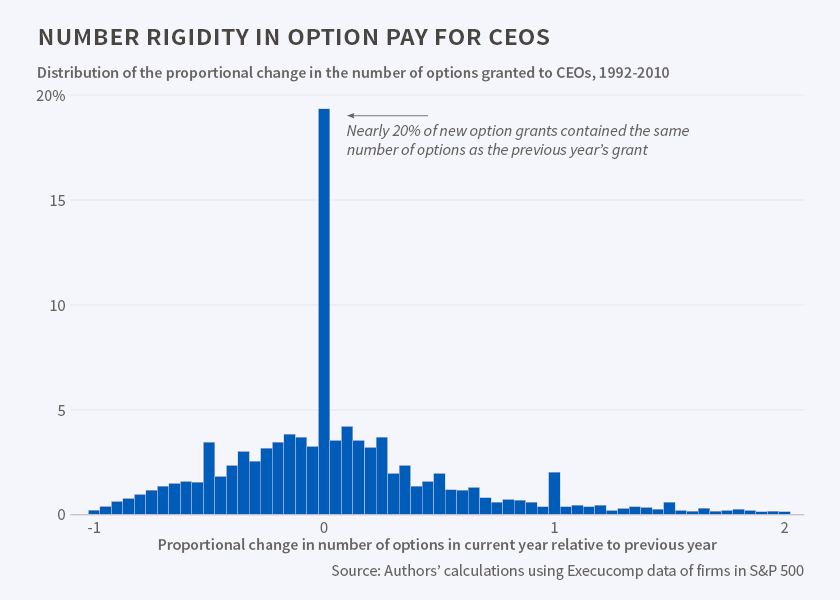 When a company's stock price is rising, granting the same number of at-the-money stock options every year amounts to increasing compensation.

During the period of rising stock prices in the 1990s and early 2000s, the total compensation of chief executive officers rose rapidly. The pay of the median CEO at an S&P 500 firm was $2.9 million in 1992, measured in 2011 dollars. By 2001 this figure had more than tripled, to $9.3 million. In contrast, the periods before and after the tech boom saw significantly less growth in CEO compensation. Further, growth in CEO pay during the tech boom period far outpaced growth in other high-income occupations.

In Growth through Rigidity: An Explanation for the Rise in CEO Pay (NBER Working Paper 21975), Kelly Shue and Richard Townsend suggest that rigidity in the number of stock options granted to CEOs contributed to the sharp rise in CEO pay. They observe that most executives receive grants of at-the-money call options, i.e., options to purchase company stock in the future at a price equal to the stock price on the day the option is granted. The value of such an option rises with the value of the stock price on the day the option is granted. For example, if a firm's stock price increased by 30 percent over the past year, granting the same number of options as in the previous year amounts to a 30 percent increase in this form of compensation. Thus, by keeping options grants constant in terms of number during a period of rapidly growing stock prices, boards actually drastically increased CEO pay in terms of real value.

Following regulatory changes in the early 1990s that encouraged tying CEO pay to corporate performance, stock options became an important component of executive pay. But while the value of these options fluctuates from year to year, the number of options issued to CEOs tended to stay relatively constant during the period of greatest increase in total compensation. Using data on large, publicly-traded firms, the researchers find that during the tech boom roughly 20 percent of CEOs who were granted options received the same number of options in consecutive years. In fact, many firms offered CEOs multi-year contracts that specified that the same number of options would be granted each year. During a period of increasing stock prices, this mechanically increased CEO pay. In theory, compensation committees could have offset the rising option pay by decreasing alternative forms of compensation, but the research finds no evidence of this. If anything, other forms of compensation mildly reinforced the rapid rise in option pay.

By the researchers' calculations, rigidity in options grants can account for more than half of the tech boom's deviation from long-run trends in CEO pay. This is partially due to spillover effects. Even CEOs at firms that adjusted their option grants annually may have benefited from the rising compensation of their fellow CEOs, since boards often set compensation by referring to peers. Option-grant rigidity is also consistent with the sharp rise in the correlation between CEO pay and stock returns during the 1990s, and with the increase in CEO pay dispersion during the tech boom.

The authors find that the number rigidity in options grants declined substantially following a regulatory change in 2006 that required firms to subtract the value of stock options from earnings on their income statements. Previously, firms were not required to recognize this expense, and regulations concerning disclosure of stock options tended to focus on their number rather than their value. The researchers suggest that during the tech boom, board members may not have fully understood the value of the options that they were granting to CEOs. They also find that boards with a greater percentage of independent directors, directors who joined the firm before the current CEO, or directors with M.B.A. degrees are significantly less likely to grant number-rigid options, suggesting board-member sophistication can limit unintended growth in option compensation.