Long-Term Effects of Aid for Children in Low-Income Families 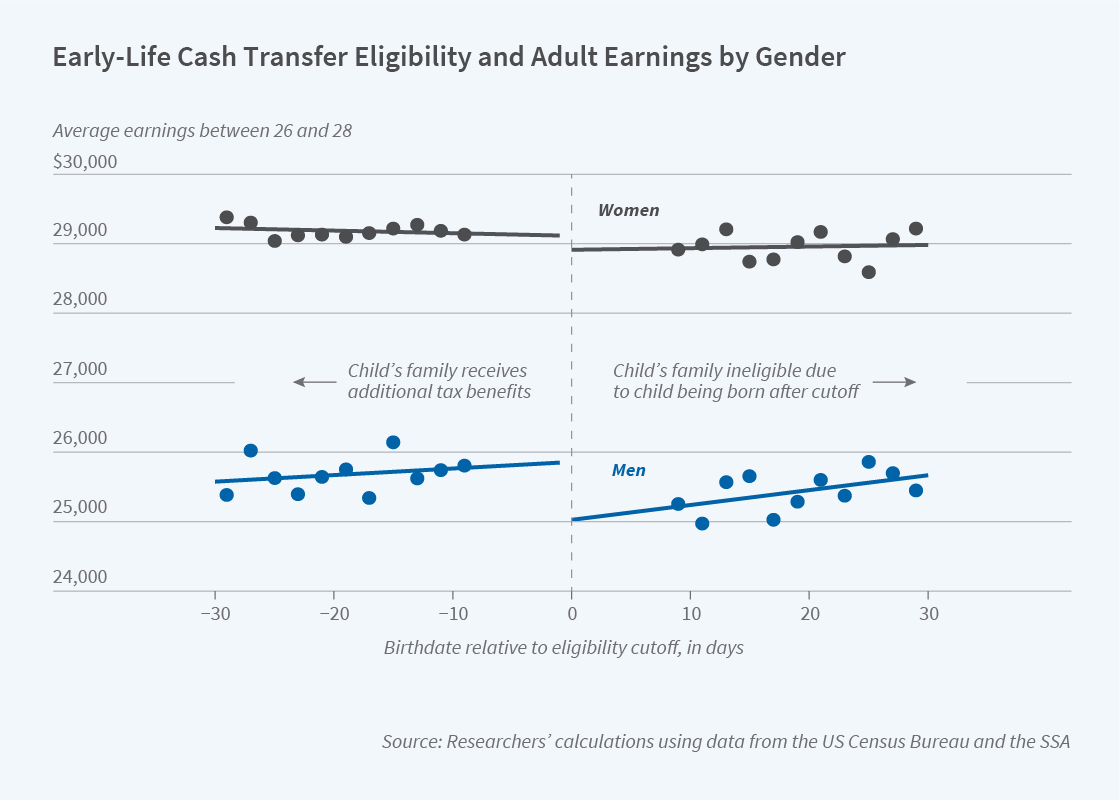 Firstborn children in families with incomes below the threshold to qualify for the Earned Income Tax Credit have significantly better outcomes as adults if their parents receive cash transfers following their birth. In Investing in Infants: The Lasting Effects of Cash Transfers to New Families (NBER Working Paper 30373), Andrew C. Barr, Jonathan Eggleston, and Alexander A. Smith track the impact of tax refunds in the first year of a firstborn’s life.

Drawing on nationwide IRS data for low-income families going back to 1979, the researchers compare firstborn children whose parents were similar in all respects that can be measured in tax return data, except that one set was born in December and the other in January. The researchers omit children born in the eight days before and the eight days after December 31. A December birth made a family eligible for an additional tax deduction and for a higher Earned Income Tax Credit. The additional benefits averaged 10 percent of family income, with an average transfer among the sample households of $1,291 in 2015 dollars.

Newborns whose parents received tax relief scored higher on tests when they became schoolchildren and had increased earnings in early adulthood.

The researchers focus on firstborns because the tax benefits associated with having a dependent child in the household are larger when the tax filer moves from zero to one child than from one to two or other expansions of family size. They link the tax returns on which the newborns were claimed as dependents, which indicate the level of transfers received, with the newborns’ own tax returns in adulthood. In their twenties, the December-born children were in households that earned 1 to 2 percent more than those born in January. This effect grew to between 2 and 3 percent in their early thirties. The effects were larger for males than for females. The additional earnings generate an increase in federal income tax revenues large enough, in present discounted value, to cover the cost of the higher tax credits for parents with newborns.

The researchers conjecture that the benefits to children are the result of parents’ being more resilient in the face of financial shocks that arise during the child’s first year.

The researchers also study the impact of eligibility for transfer income in the first year of life using educational data from North Carolina. They find that among children who were eligible for free or reduced-price lunches, a reasonable indicator that their family would be eligible for the Earned Income Tax Credit, those who were born just before the end of the calendar year performed better on standardized math and reading tests, incurred fewer suspensions, and were more likely to graduate high school than their slightly younger, January-born peers.

The researchers caution that their evidence describes the impact of transfers during the first year of a first child’s life, but not of the impact of transfers provided at different ages. They also note that their sample is restricted to firstborn children. “With those caveats,” they nevertheless conclude, “our results do suggest that additional resource transfers to poor families around the time of a first birth would result in substantial improvements in social mobility.”

Investing in Infants: The Lasting Effects of Cash Transfers to New Families