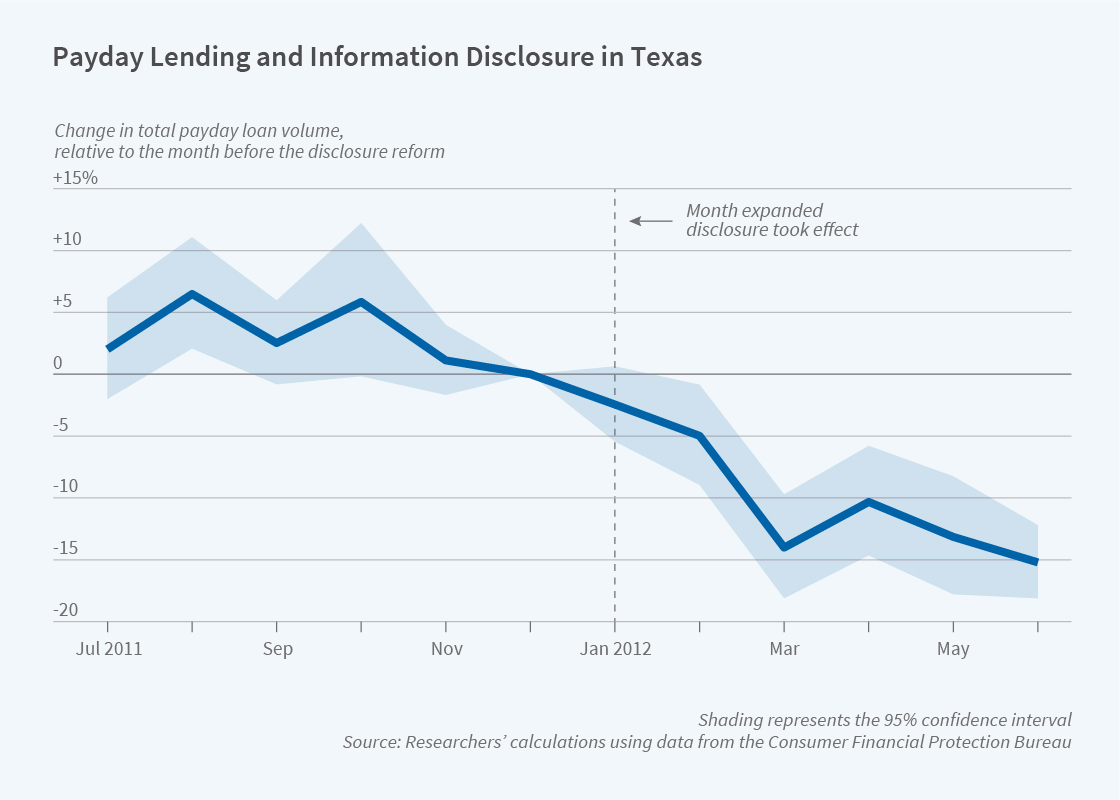 Requiring payday lenders to give potential borrowers information comparing the cost of their loans and other credit products reduced payday borrowing by 13 percent.

Consumer protection regulation is motivated, in part, by concern that markets do not provide consumers with the information necessary to make optimal choices. Requiring firms to make disclosures is a core consumer protection tool.

In The Effects of Disclosure and Enforcement on Payday Lending in Texas (NBER Working Paper 28765), Jialan Wang and Kathleen Burke explore the effects of such disclosures, as well as restrictions on loan size and amortization, on the payday loan market. Payday loans are very short-term, high-interest loans that often come due around the borrower’s next payday. Previous research on payday loans suggests that some consumers use them in ways that are not in their best interests. This is often attributed to behavioral biases, such as present bias, overoptimism, and limited attention.

In 2012, Texas enacted a law requiring firms to make disclosures to consumers before every payday loan transaction. The disclosures compare the cost of payday loans with the cost of other credit products and present the likelihood of loan renewal in easy-to-understand terms. Using a dataset covering payday loans in multiple states, the researchers find that the Texas disclosure rules were associated with a 13 percent decline in loan volume that persisted for at least six months after the regulations were implemented.

The researchers also examined the effects of city ordinances in Austin and Dallas, enacted at the same time as the disclosure rule, that restricted the loan-to-income ratio and amortization rate of payday loans made within city borders. Once enforced, loan volume declined by 61 percent in Austin and 44 percent in Dallas. The study did not find any effect of either disclosure or quantity limitations on loan prices or evidence of income falsification to evade regulation. It found only limited evidence that disclosures affect renewal, delinquency, and default rates. There were no clear patterns by income or other borrower characteristics, with every demographic group exhibiting a significant reduction in borrowing. Overall, the results suggest a decline in demand and reduction in lender revenue as a result of the disclosures.

Although the researchers cannot pinpoint the psychological mechanisms that account for the consumer response to disclosure, they hypothesize that at least some consumers concluded they were better off taking fewer loans once they were exposed to easy-to-understand information. They point out that since consumers across a range of demographic groups responded similarly to the disclosures, it may be challenging for regulation to target biased consumers based on easily observable characteristics. The results illustrate the potential role of disclosures and other interventions as a counterbalance to behavioral biases.

The Eﬀects of Disclosure and Enforcement on Payday Lending in Texas