Market Concentration Has Declined from the Consumer Perspective 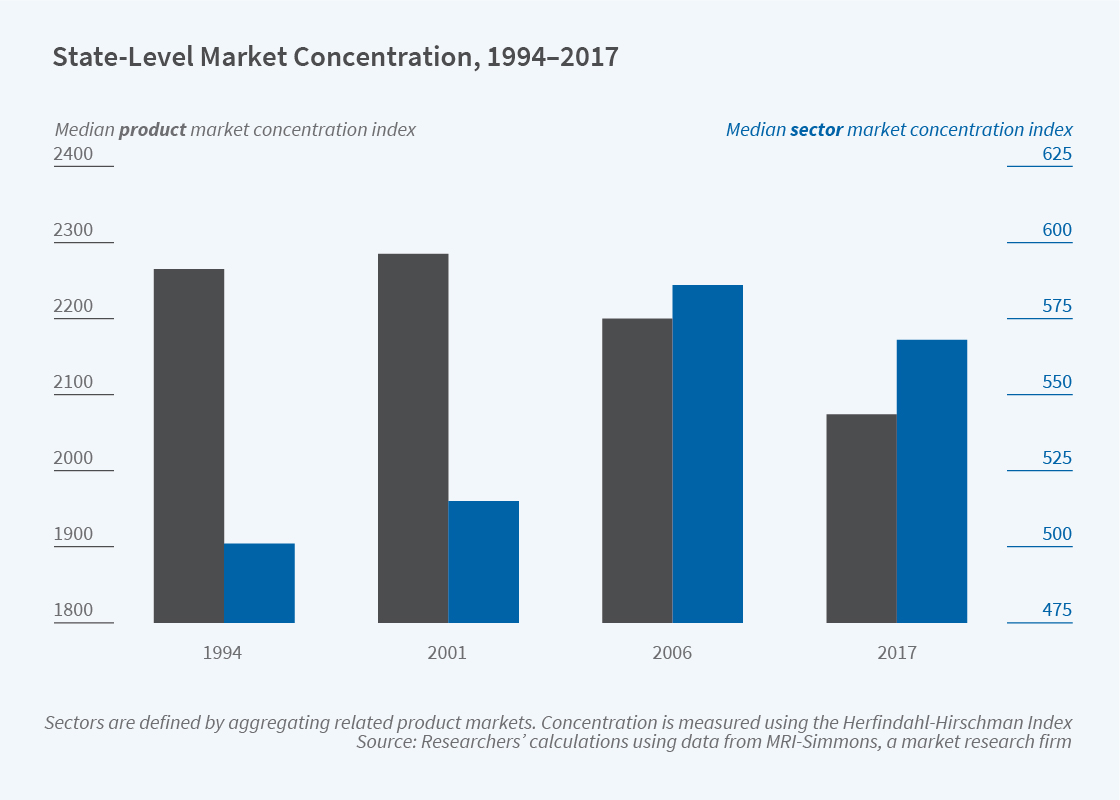 Viewed from the consumer’s vantage point, 44.4 percent of all industries were highly concentrated in 1994, compared with 36.6 percent in 2019.

The extraordinary growth of companies like Alphabet, Amazon, and Apple, and high-profile mergers in fields such as airlines, hospitals, and media, have generated intense interest in the changing nature of competition in the United States. As megafirms have emerged in a number of industries, many studies have pointed to rising concentration as a possible explanation for the declining share of labor in national income, as well as low rates of corporate investment and productivity growth.

A study by C. Lanier Benkard, Ali Yurukoglu, and Anthony Lee Zhang suggests that determining whether concentration has been rising or falling depends critically on the boundaries one draws between different markets. From the producer’s perspective, data on business sectors collected by the Census Bureau show clear evidence that concentration has risen. In Concentration in Product Markets (NBER Working Paper 28745), the researchers instead focus on concentration in product markets as experienced by consumers — the approach that antitrust regulators adopt — and estimate that concentration trends have been falling, rather than rising, for the past 25 years.

To illustrate the different perspectives, the researchers consider the case of metal cans. The Census Bureau puts all metal can production into a single category, including soda cans, aerosol cans, and paint cans. But these products are not substitutes for one another and do not compete in product markets. Meanwhile, soda cans can be replaced by glass or plastic bottles, goods that have their own, separate, Census categories.

The Census Bureau also defines industries nationally, even though many products are not transportable and compete only locally. That can lead to skewed conclusions. For instance, at the national level, concentration in cable TV has risen dramatically over the last few decades. But at the local level, in the market that matters to consumers, competition has increased and more consumers have multiple cable and satellite suppliers to choose from.

From the perspective of consumers, the researchers show that concentration fell across the board in the past quarter century. Herfindahl-Hirschman indices (HHI) are a common measure of market concentration. The median HHI decreased from 2,265 to 1,945 between the years 1994 and 2019, and the HHI at the 90th percentile dropped from 5,325 to 4,570. Industries with HHIs between 1,500 and 2,500 are considered moderately concentrated, while those with HHIs above 2,500 are thought of as highly concentrated. In 1994, 44.4 percent of all industries were highly concentrated; in 2019, the comparable value was 36.6 percent.

Industries with the largest decreases in concentration often saw a new brand enter the market. In 1999, for example, Gorilla Glue started challenging dominant brands Elmer’s and Krazy, both of which are owned by the same company. By 2019, Gorilla had more than 30 percent of the market.