The Impact of California’s Gender Quotas for Corporate Boards 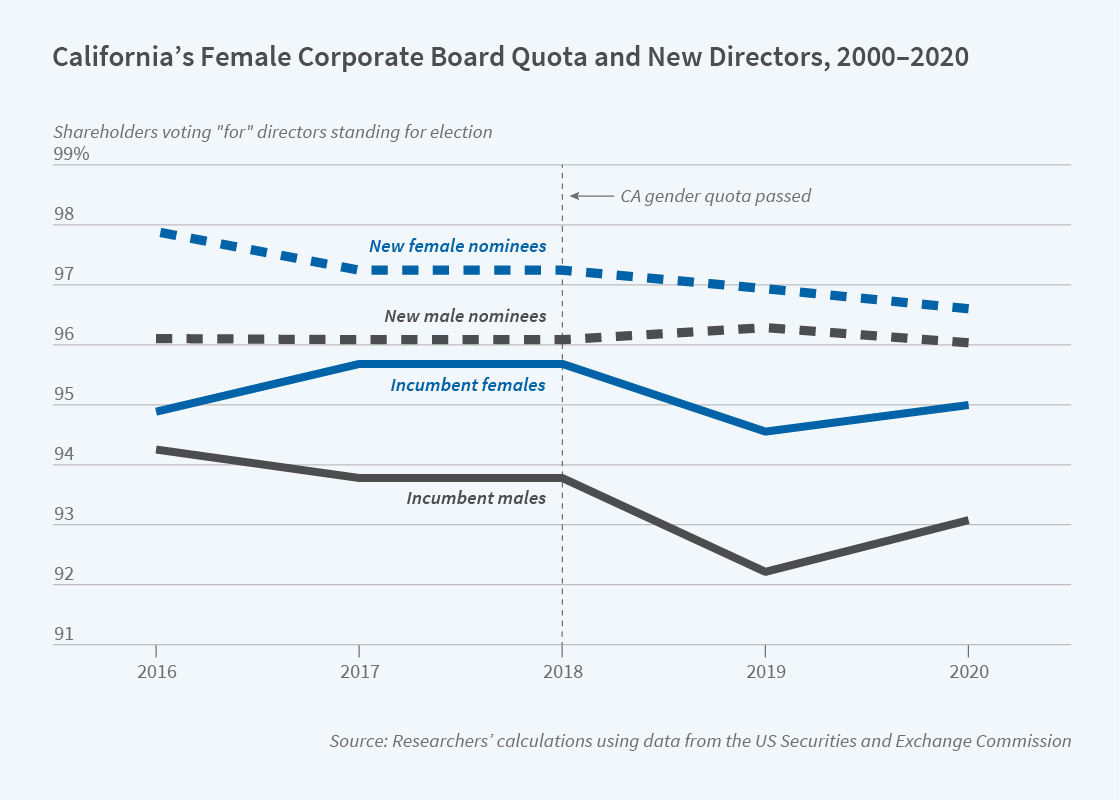 Shareholder support for new female board nominees decreased to that of new male nominees after board gender quotas were mandated, but share prices declined only for firms that failed to replace the least-supported directors.

In 2018, California enacted a new law that required all publicly held corporations headquartered there — 12 percent of all US firms — to have at least one woman director by the end of 2019. By the end of 2021, the statute requires boards with five members to include at least two women, and at least three women on boards with six or more directors.

In Gender Quotas and Support for Women in Board Elections (NBER Working Paper 28463), Marina Gertsberg, Johanna Mollerstrom, and Michaela Pagel study the early effects of this legislation on the composition of boards, the support for men and women who are nominated to corporate boards, and the share prices of California-based companies. They study Securities and Exchange Commission data on 585 firms of all sizes from January 2016 to July 2020 ­— a two-year bracket around the law’s enactment.

The researchers examine shareholder support for director candidates before and after the new law took effect. Throughout their sample period, women who were standing for board election, both new directors and incumbents, received more support than their male counterparts. Under the assumption that stronger board candidates are likely to secure higher levels of shareholder support, this suggests that the board nomination process held women to a higher standard than men before the legislation took effect. After 2018, shareholder support for new female nominees declined toward the level of support for new male nominees. However, incumbent female directors standing for reelection saw almost no change in support, while there was a sharp decline in the level of support for incumbent men who were standing for reelection.

To explore how quotas on board composition affect firm value, the researchers compare the stock market returns of California-based companies around the enactment of the new legislation with the returns of similar non-California firms. California firms, particularly those that were least in compliance with the quota at the time of the legal change, lost value. The loss of value was concentrated at firms that did not replace their lowest quality male board members. The researchers conclude that market concerns about entrenched board dynamics, and not a shortage of qualified women directors, drove the negative stock price reaction.

Gender Quotas and Support for Women in Board Elections