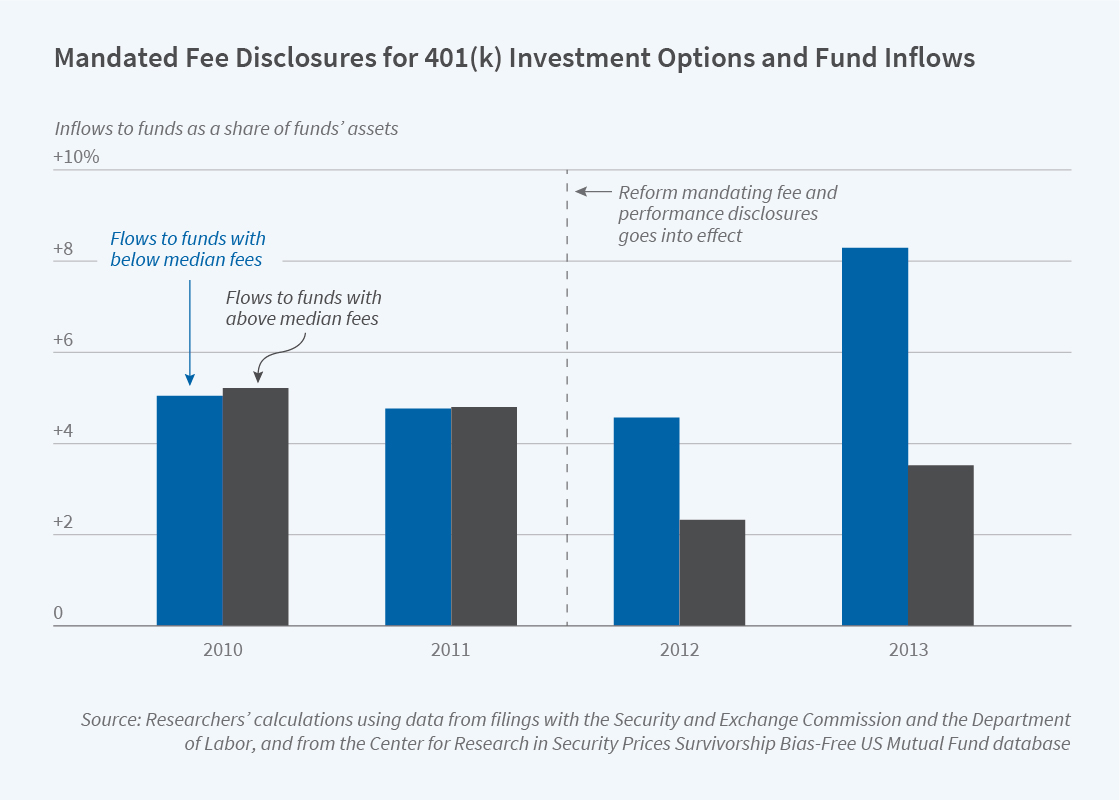 When the US Department of Labor required retirement plans to make the fees and returns on investment options more accessible, many savers switched to cheaper funds.

At the beginning of 2012, the US Department of Labor (DOL) required fiduciaries of 401(k) retirement plans to provide plan participants with an accessible presentation of the annual fees and returns of each investment option in their plan. Though this information had long been publicly available, it was often difficult to find, as it was reported in fund prospectuses or regulatory filings.

In Out of Sight No More? The Effect of Fee Disclosures on 401(k) Investment Allocations (NBER Working Paper 27573), Mathias Kronlund, Veronika K. Pool, Clemens Sialm, and Irina Stefanescu show that in response to the increased clarity of these presentations, many retirement plan participants have switched their retirement investments to cheaper funds.

The researchers collected information on the complete set of investment options offered by a large sample of 401(k) plans from Form 5500 filings required by the DOL from 2010 through 2013. They compared how plan participants allocated their retirement money among the funds in each plan for the two years before and after the regulatory change. They matched the mutual funds offered in these retirement plans with entries in the CRSP Survivor-Bias-Free US Mutual Fund Database to obtain information on net asset values and fees. They restricted their sample to plans with at least three and no more than 100 investment options. Each year of the sample contained nearly 1,400 plans.

By 2013, the sample of retirement plans included about 18 million participants who together had $1.3 trillion in retirement assets, roughly a third of the total 401(k) assets in the United States. The average plan had $799 million in assets and 13,000 participants. The average participant’s account was worth $77,200; the average contribution was about $4,600 per year. In general, plans averaged 21 investment options, 18 of which were on the menu for at least two consecutive years. About half of the investment options in the sample were domestic equity funds.

The average annual fee across all funds in all plans in the sample was 0.57 percent. It ranged from 0.16 percent in the 1st percentile to 1.05 percent in the 99th percentile. To study how retirement plan participants changed their investment allocations, the researchers measured the investment flows in and out of plan investment options. They found funds with a one-standard-deviation lower average expense ratio — 0.36 percentage points — experienced a 0.17 percentage point per year increase in plan allocation. To place this in perspective, the median fund’s share of assets in a retirement plan is 2.9 percent. Funds with a one-standard-deviation higher fee had an 8 percent higher probability of experiencing outflows, as investors actively moved money away.

Out of Sight No More? The Effect of Fee Disclosures on 401(k) Investment Allocations