Skip to main content
The Bulletin on Retirement & Disability: No. 1, February 2020

Why Does Knee Pain Differ by Education?

There is a strong socioeconomic gradient in health and disability among older Americans. Individuals with lower levels of education report more musculoskeletal pain and more depressive symptoms than do individuals with more education. As musculoskeletal pain and mental illness are the leading causes of Social Security Disability Insurance (SSDI) receipt, it is important to gain a better understanding of differences in health across socioeconomic groups that may be affecting levels of SSDI receipt.

In Socioeconomic Status, Perceptions of Pain, and the Gradient in Disability Insurance (NBER RDRC Working Paper 19-03), researchers David Cutler, Ellen Meara, and Susan Stewart explore the differential experience of pain by education group. The authors focus on knee pain as a specific example of musculoskeletal pain that plays an important role in SSDI receipt. Knee pain is convenient to study because there are clinical measures of knee anatomy that allow for the measurement of the degree of physical injury.

High school graduates and dropouts report higher levels of knee pain than college graduates. Although the theoretical reason for this correlation is unknown, there are several possible explanations that merit further exploration. First, the less educated could have more underlying structural knee damage. Second, for a given level of knee damage, the less educated could experience more pain due to a number of possible factors, including higher rates of obesity, more physically demanding jobs, and psychological differences (in rates of depression, isolation, stress, or response to painful stimuli). Finally, pain could be mitigated by access to medical treatment, and this access may also differ by education.

The authors begin by assessing the level of physical knee damage by education group. Most knee pain is related to arthritis, a condition characterized by the breakdown of the cartilage that cushions the space between the bones. Arthritis can be affected by genetics, but behavioral and environmental factors seem to be more important — excessive weight and certain repetitive motions are risk factors, while some types of exercise can reduce risk. The severity of arthritis can be assessed by x-ray and is commonly measured on a 5-point scale. The authors assess the presence of arthritis using knee x-rays for over 3,000 individuals, data collected in the 1990s that can also be matched to reports of knee pain. 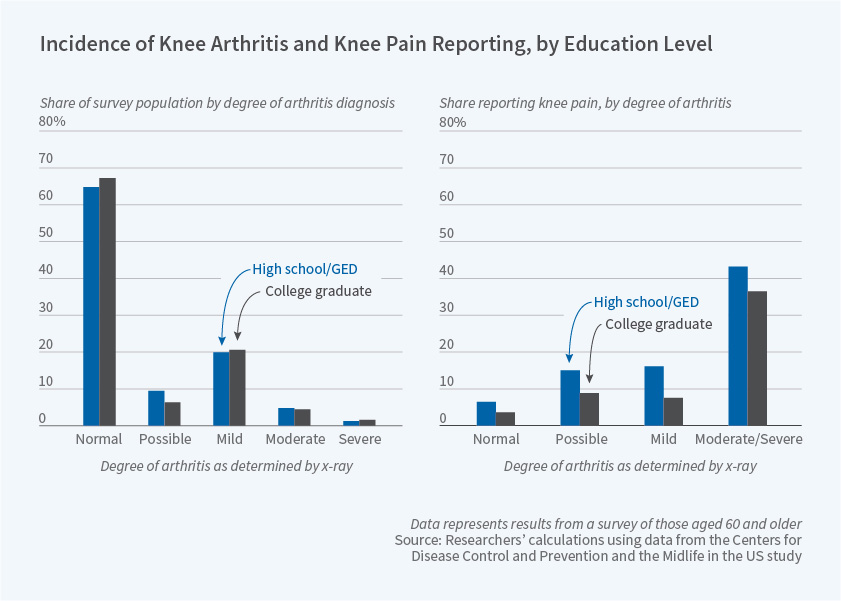 The first finding is that while the knees of college graduates display slightly less arthritis than those of people with a high school degree or less, the differences are small. For example, the share of knees with no signs of arthritis is 2 percentage points higher among the college educated. By contrast, reports of pain conditional on degree of knee injury are substantially lower for college graduates, and this result is seen for every level of knee arthritis, including in those with no sign of arthritis. Overall, the college educated are an estimated 7 percentage points less likely to report knee pain, and this effect is even larger after controlling for differences in knee symptoms and functioning (such as degree of swelling and range of motion). The authors conclude that more than two-thirds of the educational gap in knee pain is not due to structural differences in knee anatomy. Next, the authors ask whether the reported pain is "real." A variety of evidence suggests that pain is truly experienced. For example, knee pain correlates with the ability to do physical activities, such as walking time and leg strength, as well as with subsequent medical interventions such as knee replacement.

The other hypotheses involve differences in life satisfaction or in the response to painful stimuli. The authors find that psychological factors such as depressive symptoms or sense of control (as measured prior to the onset of knee pain) can explain only 11 percent of the differences across education groups in the onset of knee pain. Similarly, there is very little role of somatic factors such as pain tolerance in the onset of knee pain. Finally, the authors argue that differential access to medical care is unlikely to explain the gradient in knee pain, as there was little effective medical treatment for pain for most of the time period they study.

Overall, the study's findings suggest that the primary factors influencing the educational gradient in knee pain is having worked in a more physically demanding job and being obese. Exploring the implications of their findings for future changes in disability in light of trends in obesity and occupational mix, the authors conclude, "based on these trends, it seems reasonable to forecast that knee pain and associated impairments will continue to increase. It may be that the disability insurance system will have to adapt to a continued increase in the share of people with severe pain, for which the optimal policy is not clear."