The NBER is pleased to feature a Q&A with research associates Ellen Meara and Richard Frank, both of Harvard University, whose research on differing aspects of disability are summarized earlier in this issue. 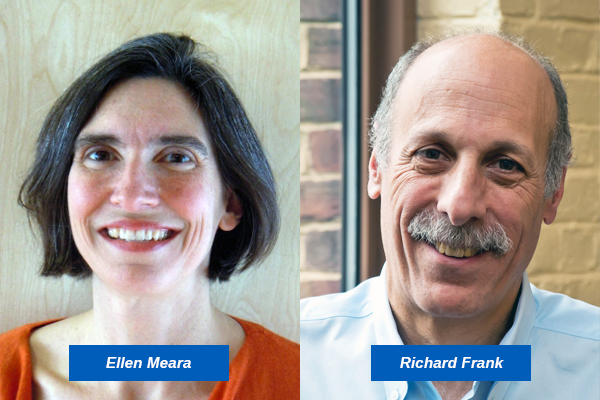 A (Meara): In our paper, we saw that two workers with identical health on objective measures like an x-ray or MRI of the knee can report very different levels of pain in ways that are linked to education. These educational differences tracked differences in physical demands of occupations more likely among high school graduates than college attendees. Although automation lessens the physical demands of some occupations, the fastest growing occupations in the US, home health care and other personal care jobs, are both physically demanding and hard to automate. As more workers move into physically demanding service sector jobs, we can expect musculoskeletal conditions to remain an important source of disability and claims for years to come.

Q (Frank): While your current work focuses on mental health and SSDI receipt, many people with severe mental illness are also eligible for Medicare, Medicaid, or both. What does your previous work tell us about the provision of health care for this vulnerable group?

Q (Meara & Frank): Which related areas of research appear most promising or most critical for future study?

A (Meara): While the broad contours of opioid-related risks around overdose and addiction are well documented, the health and disability consequences of prescription and illicit opioids remain unclear. For example, US mortality rates rose and life expectancy at birth fell between 2014 and 2017 in part, due to overdose deaths, but deaths rose for causes like cardiovascular disease and alcohol related cirrhosis as well. Such trends suggest the underlying prevalence of health problems and disability in the US has been rising. An appropriate response to such trends depends on the exact causes of health deterioration. The remedy for deaths resulting directly from opioid use (e.g. increasing access to products like naloxone that reverse the lethal effects overdose) differs from an effective response to deaths that occur indirectly due to opioids (e.g. improving self-management of chronic physical conditions). But rising morbidity and mortality may have little to do with opioids, and an entirely different solution may be required if rising morbidity and mortality are a symptom of a general decline in health and well-being as technology advances reduce opportunities, and optimism, for less educated workers. Research should seek to better understand trends in morbidity and mortality, and the ways in which some subgroups and communities in the US are hit harder than others.

A (Frank): There have been many efforts aimed at developing policies and interventions aimed at reducing the number of people on SSDI by helping them return to the labor force. Those have not been successful. Far more promising are recent clinical developments aimed at intervening early in the course of a severe mental illness to keep people engaged in work and schooling. A promising avenue for economic and policy research is developing the payment systems and financing arrangements that will support implementation of those interventions.