To understand whether older Americans have adequate financial resources to fund their retirement years, it is necessary to have accurate information about late-life income and assets. Several recent studies have suggested that administrative data and more widely-used survey data do not always provide the same picture of retirement resources. 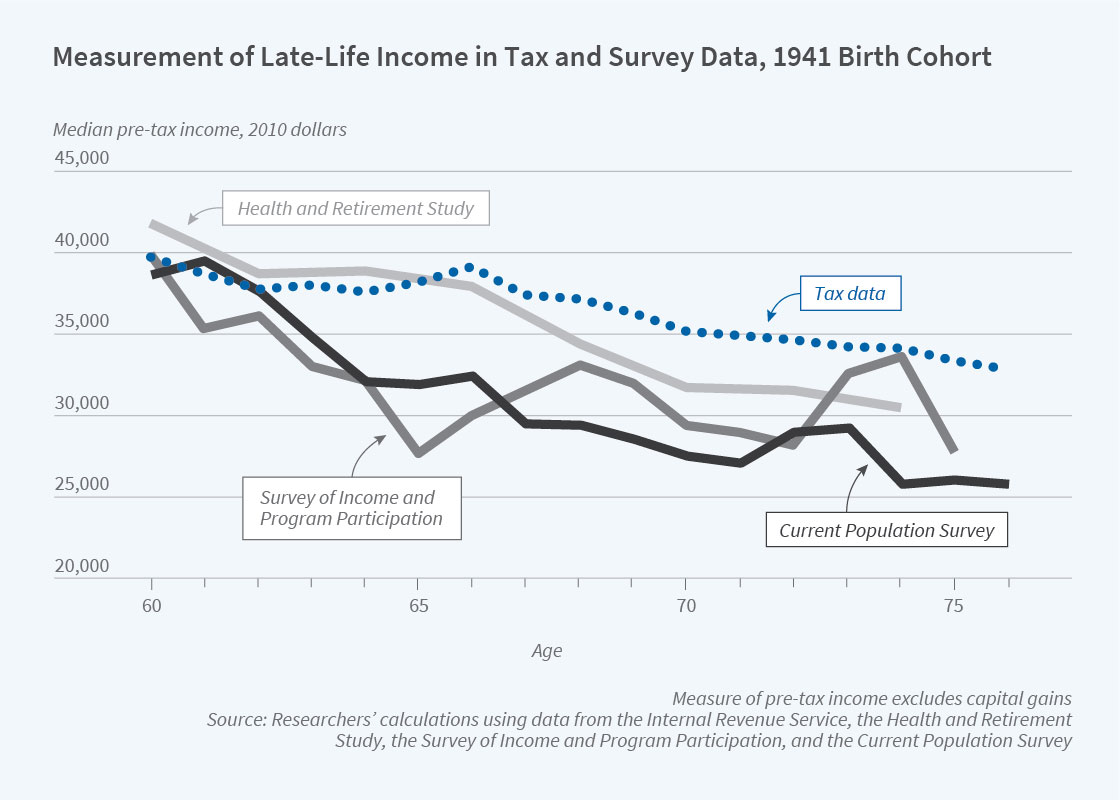 The authors focus on individuals born between 1933 and 1952, whose tax records they observe between 2001 and 2017. The authors construct income and asset variables that are similar across the IRS data and three surveys and adjust for differences in the samples, such as whether people living in institutions or with zero tax liability are included. The analysis excludes income from Supplement Security Income (SSI), Veterans Affairs (VA) pensions, and other government transfers, as well as capital gains and losses.

A first key finding is that for middle-income households, the decline in household income with age during the early years of retirement is smaller in tax data than in survey data. Among those born between 1943 and 1949, the decline in median pre-tax income between age 58 and age 68 is 11.7 percent in the tax data, versus 24.4 percent in HRS, 16.8 percent in the SIPP, and 29.0 percent in the CPS. The reason for the discrepancy is that the surveys tend to overestimate income from work at age 58 and to underestimate income from Social Security and especially pensions.

There are some differences across the surveys, with the SIPP more closely approximating the income of older households for some specific income categories but the HRS more closely approximating total pre-tax income of older households, due to offsetting patterns in under- and overestimating various types of income. Balances in Individual Retirement Accounts (IRAs) are measured quite accurately in the HRS, especially at older ages, while the SIPP significantly underestimates IRA balances.

The authors conclude, “the tax data show considerable declines in income across the distribution as households age. However, relying on survey data alone will overstate this decline at the median during the initial transition to retirement, leading to overly dire assessments of middle-income household retirement preparedness. By contrast, while the tax data show income growth across birth cohorts, growth at older ages across cohorts is overstated in survey sources. Leaning on survey data will therefore present an excessively optimistic picture of cohort trends in retirement preparedness. All sources indicate declining income outside of the Social Security system for low-income households, as well as an increasing share of households who are entirely reliant on Social Security to finance their consumption.”