Nearly half of all Americans live paycheck to paycheck, with little savings to respond to an unexpected shock like a car repair or hospital bill. Many low-income and elderly households are reliant on government programs to make ends meet. For these households, a mismatch in the timing of when benefits are received and when bills are due can affect the households' ability to pay for necessary goods and services.

Their study examines how the timing of receipt of Supplemental Nutrition Assistance Program (SNAP) benefits affects the household's ability to pay their electricity bill. SNAP is the largest food security program in the US, with 40 million individuals served and expenditures of $65 Billion in 2018. While previous research has established that households experience greater financial distress when there is a mismatch between the timing of Social Security or Disability Insurance benefit receipt and the due dates for mortgage, auto, or credit card payments, it is unknown whether the timing of SNAP benefits is similarly important.

SNAP benefits are loaded on to an electronic benefits transfer (EBT) card, which can be used to purchase food items at grocery stores and other retailers. SNAP payments are made on the first day of the month in the state for which the authors have data. The authors obtain account-level data from an anonymous electricity provider serving a state in New England. These data include the date when electricity bills are received and due, as well as information on payments. The authors use these data to explore whether receiving a bill closer to the timing of SNAP receipt affects whether households pay their bills in full or experience collections activity or disconnection of service for failure to pay. 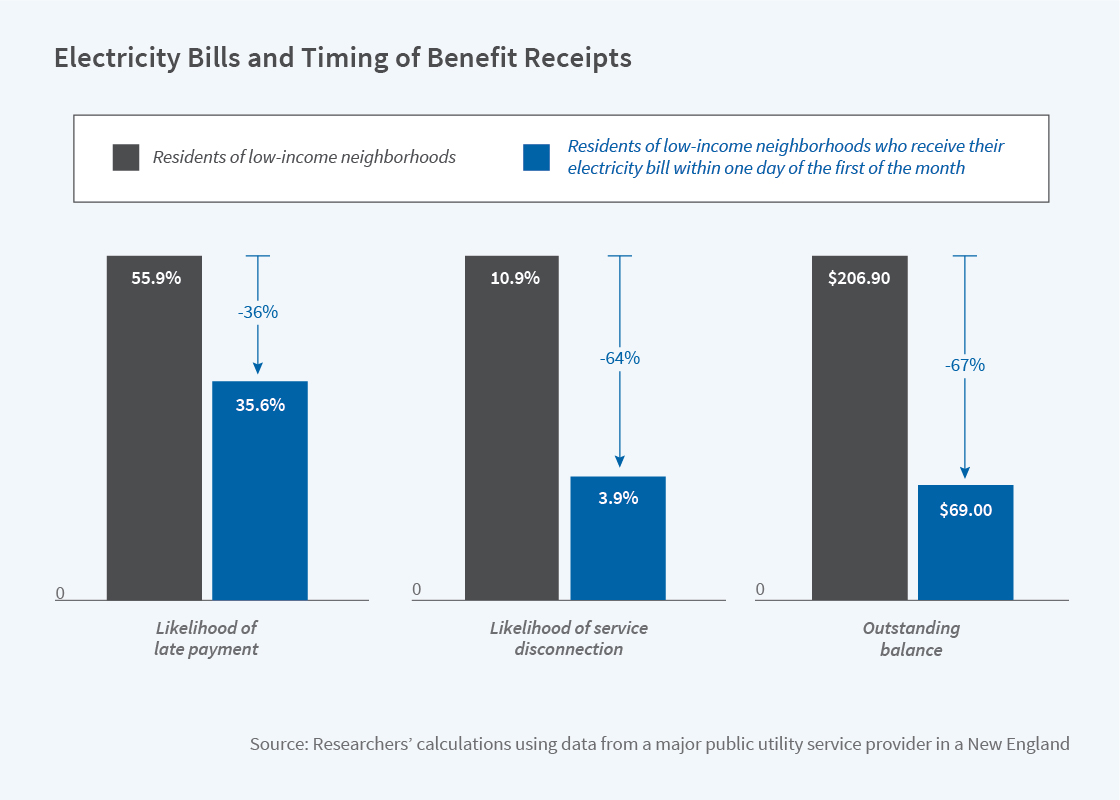 The authors look for similar patterns among those living in neighborhoods with a high concentration of elderly residents. Nearly all elderly residents receive Social Security benefits, typically at a different time than they receive SNAP benefits (if eligible), since the distribution of Social Security benefits occurs throughout the month. Focusing on high-elderly low-income neighborhoods produces results that are similar to the original results but up to one-third smaller, as might be expected given older residents' access to Social Security income.

In concluding, the authors say, "our results suggest that, for low-income households, timing of income from government benefits and the timing of bills may have long-run consequences. If bills are not received when income is received, households are more likely to miss payments, which may compound into disconnections which may further impact family financial and health outcomes. In the case of electricity bills, moving bill receipt to coincide with SNAP benefit receipt could improve repayment rates. This could help low-income families avoid poverty traps, but also lower electricity rates for all rate payers in regulated markets, since collection and electricity service disruption are costly and must by covered by regulated electricity rates."