Changes in the Generosity of Pensions for State and Local Workers 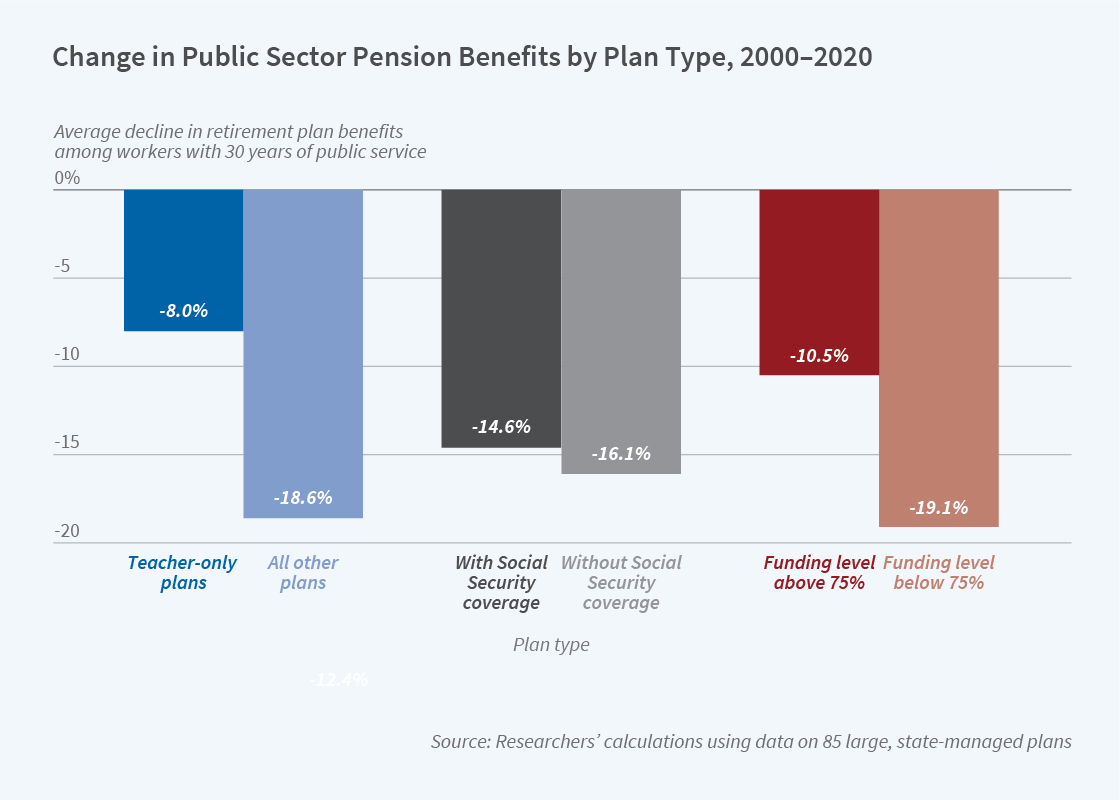 In recent years, many state and local governments have decreased the generosity of the benefits promised to plan participants due to rising fiscal burdens. In Reductions in the Generosity of State and Local Employee Pensions: Comparison of Plans with and without Social Security Coverage (NBER RDRC Working Paper NB21-09), researchers Nino Abashidze, Robert Clark, and Lee Craig offer a history of retirement plans for state and local workers in the US, with a focus on the decreases in generosity of those plans over the past 20 years.

Public school teachers were among the first state and local employees to receive pensions. As other categories of state workers gained access to pensions, many states maintained separate plans for teachers — indeed, 27 states still have such plans today. The authors argue that teacher plans started earlier than plans for other state workers because the cost of teacher turnover was higher than that of other entry-level state workers and because teachers were the largest well-defined category of state employee. The authors also suggest that being a well-defined and more homogenous group helped teachers bargain to keep their plan separate from that of other state employees.

While state and local workers were initially prohibited from participating in Social Security, amendments in the 1950s made their participation possible. Of the 17 state-managed plans that are not in Social Security today, 10 are teacher-only plans. The authors suggest that the disproportionate exclusion of teacher plans from Social Security can be attributed to the small financial gains to states from having the teacher plans participate and the complexity and cost of bargaining with teachers to make this transition.

The authors survey changes to benefits in the 85 state-managed plans that cover state and local workers over the past two decades. Plans have lowered benefits through a variety of methods, such as reductions in benefit multipliers, increases in the number of years used to calculate final average salary, and increases in the age and service requirement for normal retirement. While these changes have mostly been applied to new hires, the net value of pension benefits for current workers and retirees has also been reduced through increased employee contributions and reductions in cost of living adjustments. Also, some states have terminated their defined benefit plans and introduced new defined contribution or hybrid plans.

Turning to the results, the authors find that the average decline in teacher-only plans has been smaller than the average declines in other plans. They also find smaller declines in plans that offer Social Security coverage than in those that do not. Finally, plans with a funding level of less than 75 percent had benefit declines that were about twice the size of plans with a funding ratio greater than 75 percent.

The authors note “it is important to remember that our estimates of the decline in the initial retirement benefit represent a minimum decline in the present value of public sector retirement plans. The elimination and reduction of COLAs in many plans has reduced the real value of pension annuities in retirement. The increase in employee contributions while working has increased the total cost of participating in public pension plans even as the present value of benefits have declined.”