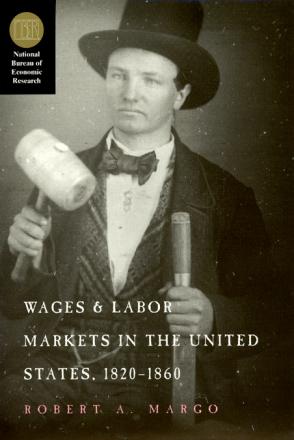 Research by economists and economic historians has greatly expanded our knowledge of labor markets and real wages in the United States since the Civil War, but the period from 1820 to 1860 has been far less studied. Robert Margo fills this gap by collecting and analyzing the payroll records of civilians hired by the United States Army and the 1850 and 1860 manuscript federal Censuses of Social Statistics. New wage series are constructed for three occupational groups—common laborers, artisans, and white-collar workers—in each of the four major census regions—Northeast, Midwest, South Atlantic, and South Central—over the period 1820 to 1860, and also for California between 1847 and 1860. Margo uses these data, along with previously collected evidence on prices, to explore a variety of issues central to antebellum economic development.
This volume makes a significant contribution to economic history by presenting a vast amount of previously unexamined data to advance the understanding of the history of wages and labor markets in the antebellum economy.