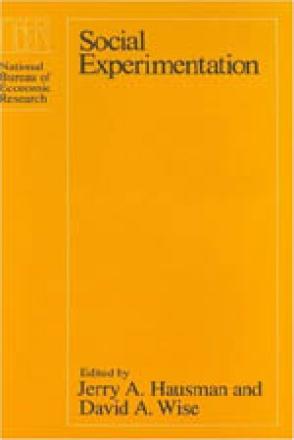 Since 1970 the United States government has spent over half a billion dollars on social experiments intended to assess the effect of potential tax policies, health insurance plans, housing subsidies, and other programs. Was it worth it? Was anything learned from these experiments that could not have been learned by other, and cheaper, means? Could the experiments have been better designed or analyzed? These are some of the questions addressed by the contributors to this volume, the result of a conference on social experimentation sponsored in 1981 by the National Bureau of Economic Research.
The first section of the book looks at four types of experiments and what each accomplished. Frank P. Stafford examines the negative income tax experiments, Dennis J. Aigner considers the experiments with electricity pricing based on time of use, Harvey S. Rosen evaluates housing allowance experiments, and Jeffrey E. Harris reports on health experiments. In the second section, addressing experimental design and analysis, Jerry A. Hausman and David A. Wise highlight the absence of random selection of participants in social experiments, Frederick Mosteller and Milton C. Weinstein look specifically at the design of medical experiments, and Ernst W. Stromsdorfer examines the effects of experiments on policy. Each chapter is followed by the commentary of one or more distinguished economists.