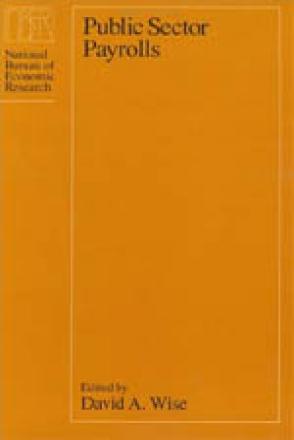 An estimated one out of five employees in this country works for some branch of government. Because policies concerning the compensation of these employees rest on assumptions about the economic dynamics of the public sector, the issue of public sector employment is of vital importance in the analysis of the national economy. In Public Sector Payrolls, leading economists explore the independent and interdependent functioning of the public and private sectors and their effect on the economy as a whole.
The volume, developed from a 1984 National Bureau of Economic Research conference, focuses on various labor issues in military and other governmental employment. Several contributors discuss compensation in the armed forces and its relationship to that in the private sector, as well as the interaction between the military and the private sector in the employment of youth. This latter is of particular interest because studies of youth employment have generally ignored the important influence of military hiring practices on labor market conditions. In other contributions, the response of wages and employment in the public sector to economic conditions is analyzed, and a detailed study of government pension plans is presented. Also included is a theoretical and empirical analysis of comparable worth in the public sector from the viewpoint of analytical labor economics. The volume concludes with a look at public school teachers’ salaries in the context of current debates over improving the quality of American education.
A valuable resource to policymakers, Public Sector Payrolls will be an important addition to research in the field of labor economics.