A Prelude to the Welfare State: The Origins of Workers' Compensation 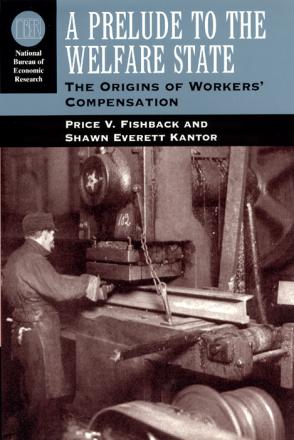 Workers’ compensation was arguably the first widespread social insurance program in the United States and the most successful form of labor legislation to emerge from the early Progressive Movement. Adopted in most states between 1910 and 1920, workers’ compensation laws have been paving seen as the way for social security, Medicare, unemployment insurance, and eventually the broad network of social welfare programs we have today.
In this highly original and persuasive work, Price V. Fishback and Shawn Everett Kantor challenge widespread historical perceptions, arguing that, rather than being an early progressive victory, workers’ compensation succeeded because all relevant parties—labor and management, insurance companies, lawyers, and legislators—benefited from the legislation. Thorough, rigorous, and convincing, A Prelude to the Welfare State: The Origins of Workers’ Compensation is a major reappraisal of the causes and consequences of a movement that ultimately transformed the nature of social insurance and the American workplace.