Political Arithmetic: Simon Kuznets and the Empirical Tradition in Economics 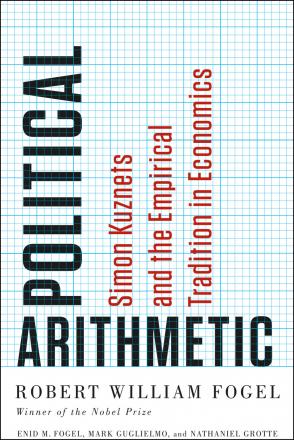 We take for granted today that the assessments, measurements, and forecasts of economists are crucial to the decision making of governments and businesses alike. But less than a century ago that wasn’t the case—economists simply didn’t have the necessary information or statistical tools to understand the ever more complicated modern economy.
With Political Arithmetic, Nobel Prize–winning economist Robert William Fogel and his collaborators tell the story of economist Simon Kuznets, the founding of the National Bureau of Economic Research, and the creation of the concept of GNP, which for the first time enabled us to measure the performance of entire economies. The book weaves together the many strands of political and economic thought and historical pressures that together created the demand for more detailed economic thinking—Progressive-era hopes for activist government, the production demands of World War I, Herbert Hoover’s interest in business cycles as President Harding’s commerce secretary, and the catastrophic economic failures of the Great Depression—and shows how, through trial and error, measurement and analysis, economists such as Kuznets rose to the occasion and in the process built a discipline whose knowledge could be put to practical use in everyday decision making.
The product of a lifetime of studying the workings of economies and skillfully employing the tools of economics, Political Arithmetic is simultaneously a history of a key period of economic thought and a testament to the power of applied ideas.

Other
History of Economic Thought