Misalignment of Exchange Rates: Effects on Trade and Industry 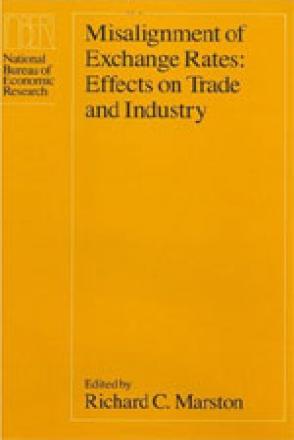 Economists writing on flexible exchange rates in the 1960s foresaw neither the magnitude nor the persistence of the changes in real exchange rates that have occurred in the last fifteen years. Unexpectedly large movements in relative prices have lead to sharp changes in exports and imports, disrupting normal trading relations and causing shifts in employment and output. Many of the largest changes are not equilibrium adjustments to real disturbances but represent instead sustained departures from long-run equilibrium levels, with real exchange rates remaining "misaligned" for years at a time.
Contributors to Misalignment of Exchange Rates address a series of questions about misalignment. Several papers investigate the causes of misalignment and the extent to which observed movements in real exchange rates can be attributed to misalignment. These studies are conducted both empirically, through the experiences of the United States, Great Britain, Japan, and the countries of the European Monetary System, and theoretically, through models of imperfect competition. Attention is then turned to the effects of misalignment, especially on employment and production, and to detailed estimates of the effects of changes in exchange rates on several industries, including the U.S. auto industry. In response to the contention that there is significant "hysteresis" in the adjustment of employment and production to changes in exchange rates, contributors also attempt to determine whether the effects of misalignment can be reversed once exchange rates return to earlier levels. Finally, the issue of how to avoid—or at least control—misalignment through macroeconomic policy is confronted.