Growth and Productivity in East Asia 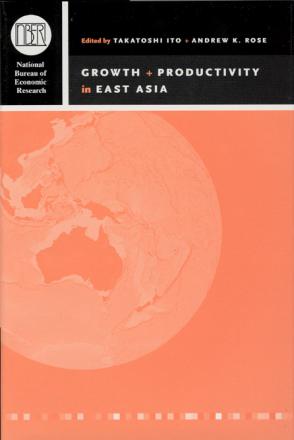 Considering the examples of Australia and the Pacific Rim, Growth and Productivity in East Asia offers a contemporary explanation for national productivity that measures contributions not only from capital and labor, but also from economic activities and relevant changes in policy, education, and technology.
Takatoshi Ito and Andrew K. Rose have organized a group of collaborators from several Asian countries, the United States, and other parts of the globe who ably balance both macroeconomic and microeconomic study with theoretical and empirical approaches. Growth and Productivity in East Asia gives special attention to the causes for the unusual success of Australia, one of the few nations to maintain unprecedented economic growth despite the 1997 Asian financial crisis and the 2001 global downturn. A new database comprising eighty-four Japanese sectors reveals new findings for the last thirty years of sectoral productivity and growth in Japan. Studies focusing on Indonesia, Taiwan, and Korea also consider productivity and its relationship to research and development, foreign ownership, and policy reform in such industries as manufacturing, automobile production, and information technology.