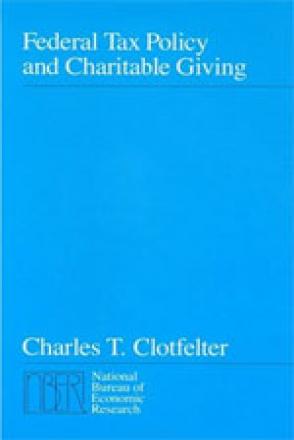 The United States is distinctive among Western countries in its reliance on nonprofit institutions to perform major social functions. This reliance is rooted in American history and is fostered by federal tax provisions for charitable giving. In this study, Charles T. Clotfelter demonstrates that changes in tax policy—effected through legislation or inflation—can have a significant impact on the level and composition of giving.
Clotfelter focuses on empirical analysis of the effects of tax policy on charitable giving in four major areas: individual contributions, volunteering, corporate giving, and charitable bequests. For each area, discussions of economic theory and relevant tax law precede a review of the data and methodology used in econometric studies of charitable giving. In addition, new econometric analyses are presented, as well as empirical data on the effect of taxes on foundations.
While taxes are not the most important determinant of contributions, the results of the analyses presented here suggest that charitable deductions, as well as tax rates and other aspects of the tax system, are significant factors in determining the size and distribution of charitable giving. This work is a model for policy-oriented research efforts, but it also supplies a major (and very timely) addition to the evidence that can inform future proposals for tax reform.